Sierra Leone, on the coast of West Africa and with a population of about five million people, has had a number of problems across the country, including a 2014 Ebola outbreak that killed thousands, flooding and mudslides that left at least 1000 dead, as well as pretty severe poverty, violence at polling places, and much more.

The country just had an election to replace outgoing president Ernest Bai Koroma, who’d served 10 years, the upper term limit for that office.

The voting was done manually on paper ballots and recorded via Blockchain, a relative newcomer to the scene that is being dubbed Web 3.0. Developed to sell Bitcoin currency, its uses are broadening all the time to conduct secure transactions (much more secure than the regular Web) that can be verified as genuine.

Three basic tenets make up this technology for elections:

1) The vote tally is stored via a distributed computing network, which means even if hackers managed to take out one or a dozen machines updating vote totals, the rest of the network just routes around them and keeps the real tallies going. In Sierra Leone, a permissioned blockchain was used, which means the ledger is visible to all but entries can only be made by authorized people—in this case, members of Agora, a Swiss digital voting foundation, entered the paper ballots into the ledger.

2) Biometric data combined with personal cryptographic keys ensure that voting is legitimate and not compromised. Agora hopes to introduce this function in future blockchain elections.

3) Hackable voting machines are eliminated, and eventually, paper ballots would be too—although they were used in the 2018 Sierra Leone presidential election.

You can view the election tally from the West District blockchain trial here, although the final result from other districts has not yet been announced. 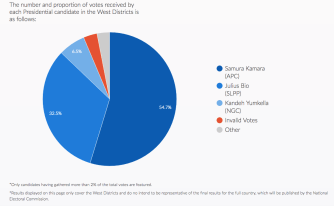 The Swiss company that made this blockchain election happen, Agora, explained in a statement: “Results of the West Districts were recorded on an unforgeable ledger and are displayed here publicly. Safe storage of election data and public accessibility is opening a new age for voter confidence and democracy itself in Sierra Leone and in the rest of world.”

With the possibility in the Western world (as well as just about everywhere else) that voting machines from companies like Diebold can be hacked, this opens up not just a more secure balloting process, but it will also mean voting from home or via mobile device is that much closer to reality.

Related
Strange Maps
The horrors of World War II air war, in one stark map
This graph shows how badly German cities were hit by Allied bombing raids.
Hard Science
Subatomic ghosts shed new light on the structure of protons
A Fermilab study confirms decades-old measurements regarding the size and structure of protons.
The Present
The Taoist philosophy behind Alibaba, China’s e-commerce giant
Alibaba has played a key role in China’s meteoric economic rise.
The Well
Can we condition ourselves to be heroes?
Neuroscientist Robert Sapolsky on the science of temptation, and the limitations of your brain’s frontal cortex.
▸
6 min
—
with
Robert M Sapolsky
Thinking
3 brain games to practice deductive, inductive, and abductive reasoning
Take a closer look at the different types of reasoning you use every day.
Up Next
Surprising Science
Uncontacted tribes: What do we know about the world’s 100 hidden communities?
As you live in our hyper-connected world, it may seem strange to realize that thousands of people still live in so-called uncontacted tribes, utterly cut off from modern civilization.