Airbus Group CEO Tom Enders has announced that the company plans to test a prototype of a “flying car” by the end of the year.

The autonomous vertical take-off and landing (VTOL) vehicle called Vahana, is going to be for individual passenger and cargo transport and is supposed to utilize clean technology. The aircraft is composed of eight rotors on two sets of wings, both of which tilt depending on whether the vehicle is flying vertically or horizontally.

The company sees the development of such vehicles as a way to reduce traffic and infrastructure costs in cities.

“One hundred years ago, urban transport went underground, now we have the technological wherewithal to go above ground,” – said Enders at a digital tech conference in Munich.

Vahana is a project of A³, the Silicon Valley arm of Airbus whose mission is “to disrupt Airbus Group and the rest of the aerospace industry.” Two other projects of the company are Skyways, which aims to help evolve current regulatory constraints and CityAirbus – an aerial vehicle that will resemble a drone but will be designed for multiple passengers and city travel. 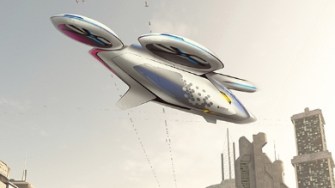 While initially CityAirbus would be operated by a pilot (similarly to a helicopter) to allow for quick entry into the market, it would switch over to full autonomous operations once regulations are in place, directly benefitting from Skyways and Vahana’s contribution.