Hurricanes and tropical storms ravaged the eastern coast of the U.S. and surrounding islands in 2017, leaving many to question the long-term habitability of the areas and those similar across the globe. But there will be soon one solution that would allow people to live safely and in style right off the coast of regions likely to be affected by the effects of climate change – at least for those with a spare $2 million.

Dutch architect Koen Olthuis, along with his studio Waterstudio, is designing “livable yachts” that would be able to withstand Category 4 hurricanes. 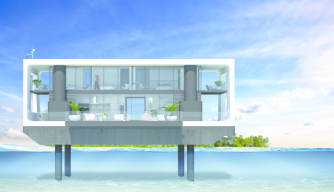 Hydraulic systems allow owners to anchor and stabilizer their homes during storms – each can be lifted 40 feet above the ocean floor. 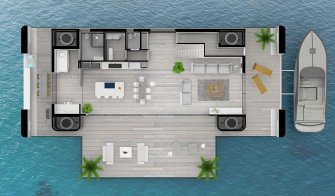 The homes features about 4,350 square feet, and the layouts are customizable.

Solar panels that line the 2,300-square-foot roof feed up to 1,000 kilowatt-hours worth of lithium batteries, enabling it to operate completely off the grid.

There’s also systems onboard that purify rainwater for drinking and plumbing needs.

Onboard technology capabilities include 4G, Satellite TV, Wi-Fi and VHF radio, as well as twin 136-horsepower electric azimuth thrusters that can rotate 360 degrees and propel the yachts at 7 knots.

Owners can dock jet skis and tenders to an onboard boat lift.

Units also come with a 24×12-foot retractable deck that provides outdoor space, and can be submerged slightly in the water. 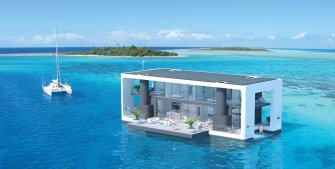 Arkup’s first prototype is set to be built on the Miami River in 2018. 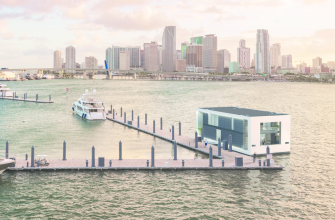 “We will see more floating neighborhoods in the next five to 10 years,” Olthuis said to Business Insider, “We will see them in Miami, Tokyo, and New York City. Cities will start to see the water as an asset.”

Why Panpsychism Fails to Solve the Mystery of Consciousness

Is consciousness everywhere? Is it a basic feature of the Universe, at the very heart of the tiniest subatomic particles? Such an idea – panpsychism as it is known – […]