It has been a difficult few years for the coal industry. With competition from natural gas, renewables, and increasing environmental concerns hammering it over the last few years. Coal, that little rock that sparked an industrial revolution, seemed like it might be on the way out. But now, a new leaf turns. One which makes the future clearer.

Capitalism itself may have turned on coal.

According to a report by Greenpeace, the Sierra Club and CoalSwarm, the number of coal plants being built around the world fell by two thirds in the last year, and the number of planned new plants fell by nearly half. The study suggests this is due to a large number of factors including: the ever lowering cost of natural gas, the improved affordability of renewable sources, the factoring in of environmental and health costs when considering coal usage, the increasing feasibility of microgeneration of power, and the general bet that many people are making that these trends are likely to continue. The effects of these market forces are easy to see. In the United States alone, the share of electricity produced by coal burning fell from 49 percent to 33 percent from 2008 to 2012. No region of the country is safe, and the decline in coal usage has even been notable in Appalachia.

In China, the last coal plant in Beijing has closed; a victim of environmental concerns, government regulations, the economic cost of pollution and the shift of China from an industrial power to a post-industrial one. In India there is an increasing reluctance by banks to finance new coal projects. In Scotland, the last coal plant was shuttered last year.

Of course, there are those who think this recent data is just a blip. There are, for example, 570 new coal plants in the pre-construction phase around the world right now, primarily in Asia. The vast majority of coal burning plants that are in use are also not going anywhere anytime soon.

The chief executive of the World Coal Association, Benjamin Sporton,  also offered an alternative interpretation of the findings, suggesting that, “China is reducing the number of coal-stations but not because it’s transitioning away from coal, instead the new dynamics is a signal of a more developed economy. Contrary to the picture being portrayed by certain quarters, China’s climate pledge suggests that coal will continue to be central to its energy solutions albeit through efficiencies including the use of new coal technologies.”

Is coal on the way out? These new findings suggest that it is, but they suggest that for the first time one of the key drivers of this change is the free market rather than it being purely a result of regulation. While the use of coal will continue for some time, there is little doubt that energy sources are changing. Perhaps coal, once the driver of the greatest change in human living conditions since the dawn of agriculture, will get a chance to retire in peace. 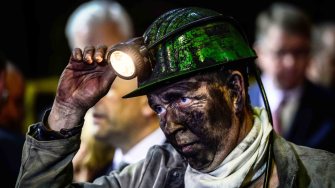 A miner in the Zeche Auguste Victoria coal mine on its final day of operation on December 18, 2015 in Marl, Germany. The mine, located in the Ruhr region whose deep industrial tradition was based on coal and steel, is among the last three surviving underground bituminous coal mines in Germany. The mine is closing due to the low price of coal on the world market and the shrinking of government subsidies, which are to run out completely by the end of 2018. Miners have hauled coal at the Victoria site in Marl since 1899 and its closing marks one of the final chapters in the end of an era in German industrial history. (Photo by Sascha Schuermann/Getty Images)

When you don’t have enough clues to bring your detective story to a close, you should expect that your educated guesses will all be wrong.
Up Next
Health

A study finds that just 30 minutes of memory training per day, for 40 days, can reorganize your brain connectivity.