There are few more alarming cinematic images than the one in which you see a Tyrannosaurus Rex in your car’s rear-view mirror barreling up the road behind you in terrifying pursuit.

Now a scientist from the University of Manchester has discovered — and even he says he’s disappointed about this — that it’s likely T-Rexes couldn’t full-out run, limited to a rather unterrifying brisk walk.

Manchester’s William Sellers modeled T-Rex based on everything we know about its height, weight, and bone size and density, and movement. His team utilized multibody dynamic analysis supplemented by machine learning to produce what they say is the most accurate T-Rex model ever.

What Sellers’ model revealed is that if if a T-Rex tried to outrun your car in Jurassic Park, all the bones in its undersized legs would break. (We won’t even mention its sad little front legs.) Previous models suggested T-Rex could run as fast as 45 mph, twice as fast as the fastest human, Usain Bolt.

It turns out that the fastest speed a Tyrannosaur could manage would’ve been about 12 mph, which is about three mph slower than the average adult human can run when chased by something huge and hungry.

Sellers says it’s probable that our entire image of the Tyrannosaurus as a fearsome apex predator is wrong. Its pokiness may mean that in spite of scaring the bejesus out of generations of children and adults, “It certainly would not have been able to chase down faster-moving prey animals,” Sellers tells Reuters. “That leaves other hunting options such as ambush, and of course it means that (discredited) ideas such as ‘T-rex the scavenger’ have to be reconsidered.” 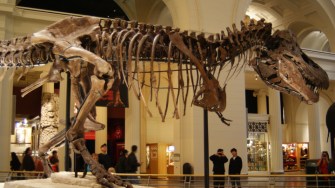 “I was a little bit disappointed, I have to say,” Sellers tells CBS News, explaining further to Reuters, “The muscles need to be able to generate sufficient power to allow high-speed locomotion, but at the same time the skeleton has to be able to cope with the loads generated by the high speed. This is where it fails. T-rex’s skeleton is simply not strong enough for running locomotion.”

Guess which country has 269% inflation.
Up Next
Starts With A Bang

After a generation, we’re finally getting another close-up view. With the science we’re learning, we just might solve its mysteries.“Jupiter instead cooled down below the threshold for fusion, but it […]