It’s a matter of some debate exactly how many neurons we have in our brains, though it’s somewhere in the millions, billions, or trillions. You’d think with all the possible connections in there, we’d have enough storage available to remember everything we ever experience. Alas, it’s not so. Sure, you remember all those song lyrics, but where are your keys? For many, though, it’s much more than a nuisance — for sufferers of Alzheimer’s, dementia, and other memory-stealing conditions, the past crumbles way, making life increasingly difficult. For some time, scientists have been wondering if it would be possible to implant a device in the human brain that could improve its biological storage capacity. Now, scientists from USC have actually done it. Team member Dong Song presented their research this month at a Society of Neuroscience conference in Washington, D.C., according to New Scientist.

What an earlier version of the prosthesis, for rats, looks like (USC) 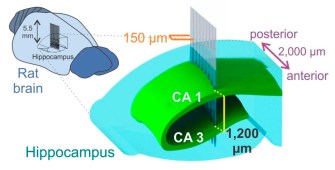 How the rat prosthesis worked (USC)

USC implanted their device in the brains of 20 volunteers who were already having electrodes implanted in their brains for the treatment of epilepsy.

The subjects were given a memory test in which they had to pick out odd, blobby shapes they’d been shown between 5 and 75 seconds earlier. The idea was to track the use of short-term and working — the type of recall you need to accomplish tasks — memory.

The implants recorded neuronal activity in each subject’s hippocampus during the test, allowing researchers to discern the electrical stimulation patterns associated with the memory tasks.

Finally, the subjects took another memory test during which the implants reproduced the firing patterns seen earlier in the hopes of enhancing subjects’ memorization abilities.

The improvement they achieved in subjects’ scores was startling: Short-term memory improved by 15% and working memory by roughly 25%. 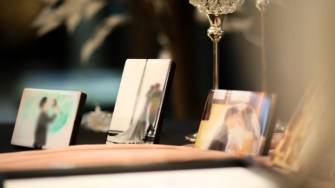 While further testing is necessary, this memory prosthesis technology could represent a breakthrough for patients with memory disorders. For these people, a 15% or 20% improvement in the ability to remember could be slow the progress of their conditions, potentially helping them hold on to their precious memories.

Related
Life
Scientists use CRISPR to insert an alligator gene into a catfish
Disease kills off 40% of farmed catfish. This gene protects them.
Neuropsych
How you breathe affects your brain
Your breathing rhythm influences a wide range of behaviors, cognition, and emotion.
Health
What happens when regular porn watchers abstain for a week?
Researchers watched for signs of withdrawal — but didn’t find any.
Neuropsych
Daily caffeine intake temporarily alters your brain structure
Compared to people who took a placebo, the brains of those who took caffeine pills had a temporarily smaller gray matter volume.
Thinking
Why you should laugh at yourself, according to Seneca and Nietzsche
“It is more human to laugh at life than to lament it.”
Up Next
Top 3 Impacts of Technology on Business Communication
There’s no denying that technology has had an enormous impact on business communication—as well as almost every other aspect of business. The ability to instantly communicate with almost anyone from […]