One of the famous ukiyo-e admirers was French artist, Vincent van Gogh. He was a versed collector of Japanese prints, claimed that all of his work is founded on Japanese art. 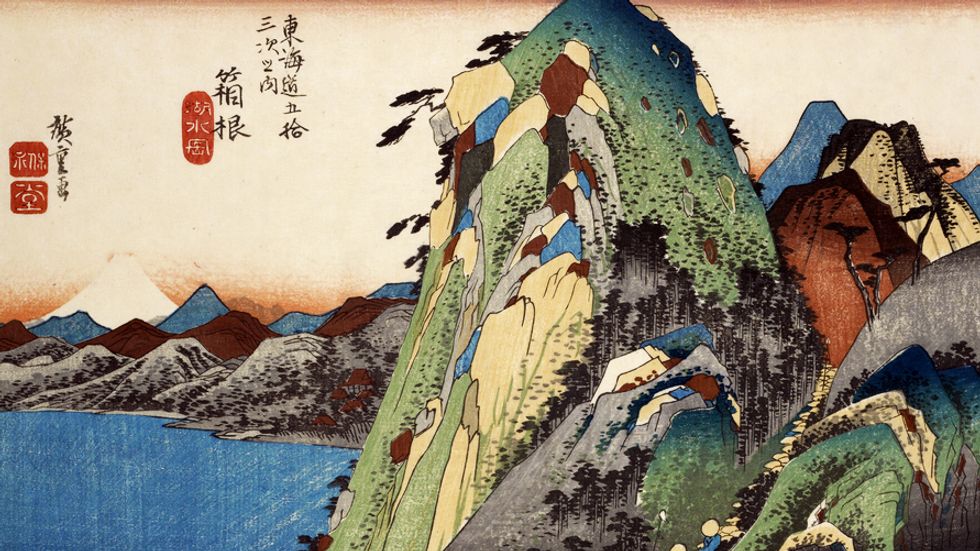 During Japan’s Edo period that lasted from 1603 to 1868, there was a road between two capitals: shōgun's capital, Edo, and the imperial capital, Kyōto. It was called the Tōkaidō Road. The 514 kilometres road passed along the picturesque sea coast of eastern Honshū. Despite the long distance, travellers usually moved by foot or cago (a kind of a stretcher carried by bearers from the non-samurai class). Along the road, there were 53 stations providing rest
for the wayfarers.

In 1832, Utagawa Hiroshige was one of these travelers, and was inspired by the scenery of landscape. Upon returning home, he published his famous Hōeidō prints edition which was dedicated to Tōkaidō Road. The prints were created in ukiyo-e style, the traditional type of Japanese woodcuts originated in the second half of the seventeenth century. Depicting landscapes wasn't a frequent topic for this genre, and it became one of the Hiroshige’s inventions. The series “The Fifty-three Stations of the Tōkaidō” got a runaway success and made Hiroshige a prominent printmaker: the last great master of ukiyo-e style.

One of the famous ukiyo-e admirers was French artist, Vincent van Gogh. He was a versed collector of Japanese prints, claimed that all of his work is founded on Japanese art and called the Impressionists art movement, "The Japanese of France." Paul Cézanne, James Whistler, and Claude Monet were amongst those under Hiroshige's influence. The collection of “Fifty-three Stations of the Tokaido Road” made from scans of the prints stored in the New York
Public Library.

All images are public domain. See the full collection on Picryl.