My wife is prone to getting hangry, as am I, which is why we always have a plethora of snacks on hand for the good of our marriage. A new study finds that our protocols may be for naught. Hunger could have more to do with our perception and expectations surrounding food than a biological, knee-jerk response. The results were presented at the British Psychological Society’s Division of Health Psychology annual conference this year held in Cardiff, Wales.

We’ve known for a long time that the sensation of hunger can be brought on not only for the need to eat but for a host of psychological reasons. Stress, anger, and sadness can all make us grab for the cupboard. Just like with everything else pertaining to humans, the experience of hunger varies widely, with people on one end of the spectrum who are always hungry, and those at the other go for hours at a clip engrossed in some activity, without realizing they haven’t eaten. 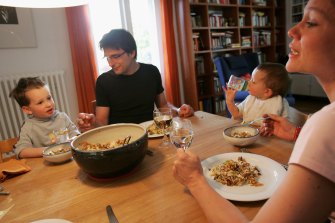 Expectations and perceptions around food make a profound difference in whether or not we feel hungry later. Getty Images.

Dr. Steven Brown of Sheffield Hallam University in the UK led this research. “Previous studies have shown that a person’s expectations can have an impact on their subsequent feelings of hunger and fullness and, to a degree, their later calorie consumption,” Dr. Brown said. “Our work builds on this with the introduction of solid food and measured people’s subsequent consumption four hours later, a period of time more indicative of the gap between breakfast and lunch.”

Turns out, the ingredients in each were the same. When, researchers went to see how hungry participants were three hours later, those who had the “’large portion,” were more satisfied than those who drank the “small portion.” 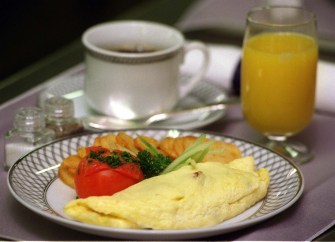 Our perception of portion size affects us profoundly. Getty Images.

26 volunteers took part in Brown’s most recent study. They were each given an omelet for breakfast. Half were told they were going to have a three egg omelet, while the other half were told they’d have a four egg one. In reality, all the omelets were made with three eggs.

Those who thought they had the smaller omelet typically reported being hungry two hours later, consumed more calories throughout the day, and ate more pasta at lunch. Even those who didn’t report feeling hungry at the two hour mark, tended to eat more during lunchtime.

“As part of the study, we were able to take blood samples from participants throughout their visits,” Dr. Brown said. “Having analyzed levels of ghrelin, a known hunger hormone, our data also suggest that changes in reported hunger and the differences in later consumption are not due to a differences in participants’ physical response to the food.”

Instead, it was their perception of the portion they received that made the difference. This took place before consumption and influenced how hungry or satiated a person felt. According to Brown, “Memory for prior consumption, as opposed to physiological factors, may be a better target for investigating why expectations for a meal have an effect on subsequent feelings of hunger and calorie intake.”

Psychologists are finding that moral code violations can leave an enduring mark — and may require new types of therapy.
Up Next
Mind & Brain