Heart disease is the number one killer in the world, globally. As a result there are all kinds of dietary guidelines we’re given to avoid it. We should limit our intake of red meat, trans-fat, saturated fat, salt and sugar, basically all the delicious things we’re programmed to crave. This new study finds that it may not be what we stuff our faces with, or at least that’s not the whole story. After all, some people eat a terrible diet and never develop cardiovascular disease.

So if it isn’t strictly diet, what else contributes? Evidence suggests certain bacteria plays a role. That’s according to a study by researchers at the University of Connecticut, at Storrs. The results were published in the Journal of Lipid Research.

The focus was on atherosclerosis or the “hardening of the arteries.” This common yet dangerous condition is when plaque forms on artery walls, narrowing the space through which blood can flow, and so raising the blood pressure. This increases the risk of heart attack, stroke, and other significant cardiovascular events.

One of the most worrisome aspects is that plaque buildup usually occurs within arteries that feed critical organs. An interesting side note that may hint at a correlation is that atherosclerosis and gum disease are somehow linked. Previously, it was theorized that plaque from the teeth traveled through the circulatory system. But this research offers a new theory, that a species of bacteria in the mouth or gut is involved. 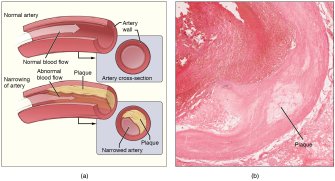 Figure (a): A model of atherosclerosis. Figure (b): an actual photo including plaque buildup. Credit: OpenStax College, via Wikimedia Commons.

This discovery surrounds lipids or fatty molecules. These build up on artery walls, causing inflammation. Inflammation has been targeted as a culprit for many serious conditions including heart disease, diabetes, cancer, and more. What University of Connecticut researchers found was that a certain kind of arterial plaque has a subtly different makeup.

Xudong Yao is an associate professor of chemistry at the university. He said the most striking difference was in weight. “We used these weight differences and modern mass spectrometers to selectively measure the quantity of the bacterial lipids in human samples to link the lipids to atherosclerosis,” he said. Another important difference, the heavier plaque contained a compound known as atheroma.

So where did this distinctive lipid originate? Researchers traced it back to a certain species of bacteria called Bacteroidetes. They produce this lipid in high quantities. 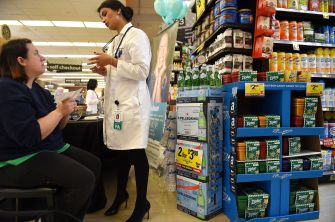 These findings may help physicians and pharmacists tag who is at risk and provide early interventions. Credit: Getty Images.

Although this particular bacteria isn’t known to cause any illness, aside from gum disease, the lipid it produces can pass through cell walls, meaning it could easily slip into the bloodstream. So arterial plaque buildup may not be due to diet, but a secretion from these bacteria. Or the two may work hand-in-hand to harden arteries. Researchers uncovered one other aspect of this dynamic.

Immune cells responsible for repairing blood vessels consider this bacteria-based lipid a threat. Researchers discovered that the presence of an enzyme that breaks down the lipid into a material used to fuel an inflammatory response. This may be where the low-level, chronic inflammation that’s associated with heart disease comes from. Such swelling causes arterial walls to thicken further, worsening atherosclerosis. On a positive note, the lipid could become a biomarker indicating the onset of heart disease, and perhaps allowing doctors to diagnose it earlier, improving treatment options and outcomes.

To learn more about the link between cardiovascular health and the microbiome, click here:

Related
The Present
How heat pumps of the 1800s are becoming the technology of the future
Innovative thinking has done away with problems that long dogged the electric devices — and both scientists and environmentalists are excited about the possibilities.
Starts With A Bang
JWST’s hunt for most distant galaxies gets double boost
Along with gravitational lensing and ALMA’s incredible long-wavelength spectroscopy, JWST is reshaping our view of the early Universe.
Thinking
Finding your essential self: the ancient philosophy of Zhuangzi explained
Adopting a healthy scepticism towards inherited ideas means “emptying the container of the Self.”
The Future
Startup’s bladeless flying car is designed to reach Mach 0.8
One of Jetoptera’s VTOLs is expected to reach speeds of around 614 mph, about as fast as a commercial jet airliner.
Health
New blood types are often discovered following medical disasters
New blood types are regularly discovered by an unusual absence or an unusual presence — both of which can result in tragedy.
Up Next
Neuropsych
Panpsychism Is Crazy, but It’s Also Most Probably True
The idea is just as ‘crazy’ as Einstein telling us that time slows down at high speeds, or Darwin saying that our ancestors were apes.