Some brilliant people among us are able to see what the ordinary eyes and minds cannot. When inventor Nikola Tesla thought of the Niagara Falls, he saw it not just as a stunning display of nature’s might and majesty but as a way to create energy for human endeavors. In 1895, Tesla and industrialist George Westinghouse created the world’s first hydroelectric power plant at the Niagara Falls, beating out Tesla’s rival Thomas Edison and changing the way we look at such powerful natural forces.

Caught up in what was dubbed by the press “the War of the Currents,” Tesla and Edison were competing against each other’s system of transmitting electricity. Tesla’s was called “alternating current” (AC) while Edison invented the “direct current” (DC). The “war” involved public competitions and demonstrations of the technology, trying to assuage concerns over commercial applications and safety. The AC system used a transformer that was able to regulate voltage in different situations like long-distance transmissions or indoor lighting and proved to be more efficient and less expensive.

As part of this competition, Tesla and Edison were involved in the proposals to develop a plant at the Niagara Falls. They were both considered in the 1893 contest organized by the international Niagara Falls Commission, but the pitch based on Tesla’s approach that was submitted by the Westinghouse Electric and Manufacturing Companywas awarded the contract. Led by the famous British physicist Lord Kelvin, the commission thought that the AC-based system proposed by Tesla via Westinghouse was a stronger bet than the scheme blessed by Edison, which utilized DC electricity. Kelvin was convinced of the superiority of Tesla’s approach during his visit to the Chicago World’s Columbian Exposition in 1893, which was powered by Tesla’s polyphase AC system, again under a deal with Westinghouse. It was also doubtful that Edison’s direct current system could be transmitted over long distances. 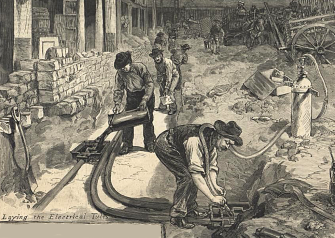 For Tesla, being involved in the Niagara Falls project was a lifelong dream. In his biography, Tesla remembered how the giant falls excited his mind as a kid. As he was playing with some mechanical models from his instructors, he considered the idea of water turbines. Hearing Niagara Falls described, Tesla “pictured in my imagination a big wheel run by the Falls.” He even told his uncle that someday he would “go to America and carry out this scheme.”

Tesla’s childhood dream came true but it took some doing. The construction of the power plant at Niagara Falls involved other famous backers, like J. P. Morgan, John Jacob Astor, Lord Rothschild, and W. K. Vanderbilt. The project took several years to put together, during which concerns that it would not work and financial difficulties threatened to derail the enterprise. Tesla himself didn’t visit the plant until it was finished, being too busy with other projects and the aftermath of the burning of his New York City laboratory, a scientific tragedy which took up months of his life in efforts to restore what was lost. 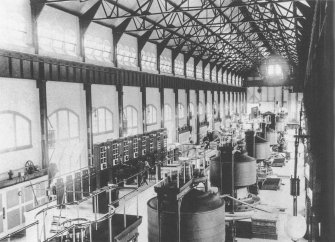 Once completed, Tesla’s generators produced 50,000 horsepower, a tremendous amount of power for that time. Finally, on November 16th, 1896, the switch was thrown, sending power to Buffalo, NY. The Niagara Falls Gazettereported that “The turning of a switch in the big powerhouse at Niagara completed a circuit which caused the Niagara River to flow uphill.”

Tesla’s own words at the opening of the Niagara Falls hydroelectric power station considered their achievement from a historical perspective, calling the station “a monument worthy of our scientific age”:

“We have many a monument of past ages; we have the palaces and pyramids, the temples of the Greek and the cathedrals of Christendom,” said Tesla. “In them is exemplified the power of men, the greatness of nations, the love of art and religious devotion.  But the monument at Niagara has something of its own, more in accord with our present thoughts and tendencies.  It is a monument worthy of our scientific age, a true monument of enlightenment and of peace.  It signifies the subjugation of natural forces to the service of man, the discontinuance of barbarous methods, the relieving of millions from want and suffering.”

How does the plant actually generate electricity? As historian David J. Kent writes, to tap into the kinetic energy generated by the rushing Niagara, some of the water going over the Falls was sent through a long tunnel where it turned a series of turbines, which converted energy into mechanical energy that created electricity.

In a few years following the opening of the plant, its electricity was ordered by thousands of residents and businesses, with the number of generators increasing to ten. The power then flowed to New York City, electrifying Broadway, street railways, and subways. Other power stations were also built on the Niagara and elsewhere in the U.S. By 1920, hydroelectric plants provided 25% of all electricity in the U.S.

Suffice it to say, no die-hard Tesla fan’s life would be complete without a visit to the Niagara Falls. Here’s a monument that honors Tesla’s contribution that looks over the falls now: Related
Starts With A Bang
The sober truth about finding the Universe’s first stars
The Universe certainly formed stars, at one point, for the very first time. But we haven’t found them yet. Here’s what everyone should know.
Life
Our antidepressant drugs are affecting animals and ecosystems
A toxicologist explains the impacts of antidepressants on fish — and no, they’re not getting any happier.
The Past
Ancient migration: Bering Strait land bridge from Asia to North America was not a one-way road
Ancient humans crossed the Bering Strait land bridge from Asia into North America. But some of them went back.
Sponsored
Want to boost your happiness? Buy experiences, not material possessions
Some experiences continue to pay dividends time and time again.
High Culture
Did Paul Cézanne hide an early self-portrait underneath a 160-year-old still life?
To answer that question, we may have to figure out when the famed painter started to go bald.
Up Next
Starts With A Bang
‘Star Trek: Discovery’ Ends With A Recipe For Principled Extinction: Season 1, Episode 15 Recap
The season finale gets the one thing Star Trek is famous for — ethics — completely wrong.Life is full of dilemmas whose solutions seem paradoxical. To obtain peace, you must prepare for war. Law […]