Say you’re engrossed in a task, scrolling through your phone or reading a book. Suddenly that creepy, prickly feeling grabs hold of you. Someone’s staring. You turn to find out who it is. Be they friend or foe, the feeling itself seems like an eerie sort of 6th sense. It’s also a necessary part of being human, an adaptation that kept our ancestors alive. So how is it that we can even do this? It’s actually an important feature of our sight, our brain, and certain social aspects of our species.

The biological phenomenon is known as “gaze detection” or “gaze perception.” Neurological studies have found that the brain cells that initiate this response are very precise. If someone turns their gaze off of you by turning just a few degrees to their left or right, that eerie feeling quickly fades. Scientists suggest that a complex neural network is behind gaze detection.

So far, the neural network responsible in humans remain unidentified. A study with macaque monkeys however, discovered the neurological circuits responsible for their gaze detection, even getting down to the specific cells involved.

We do know that ten distinct brain regions are involved with human sight, and there may be more. The visual cortex is the main contributor. This is a large area at the back of the brain, which supports many important aspects of sight. But other areas, such as the amygdala, which registers threats, must also be involved with gaze detection somehow.

Humans are sensitive to the gaze of others. When another person changes the direction of their attention, we automatically follow their gaze. It’s more than just being predators, who as a group are naturally sensitive and drawn toward changes in the environment. It also has to do with the cooperative and social nature of humans and how we’ve depended on one another throughout our history and development. 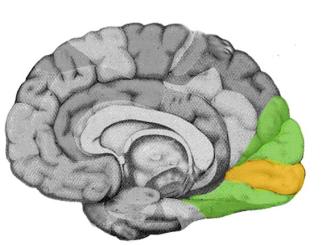 Another reason, if you look at human eyes in contrast to other animals, the sclera or white part surrounding the pupil is far larger. In most other species, the pupil takes up most of the eye. This is to obscure their eyes from predators. But for humans, a larger sclera allows us to notice the direction of each other’s gaze quickly.

Of course, we don’t have to be looking directly at someone to tell whether or not they’re staring at us. We can also evaluate the direction of their attention through our peripheral vision. But this method is much less accurate. A pair of studies finds that we can only accurately detect whether or not someone is staring at us within four degrees of our “central fixation point.”

It isn’t always about seeing another’s eyes. With our peripheral vision, we consider the position of their head. And other clues such as how their body is positioned lend to whether we think they’re looking at us or not. What if we’re not sure? Just to be safe, the brain errs on the side of caution. It assumes we’re being stared at, if there’s any doubt.

So what about when we feel someone staring from behind? According to a 2013 study published in the journal Current Biology, that’s just a fail-safe. Humans are hardwired to think that someone is starting at us when we can’t see them, even if we have no evidence to suggest so. 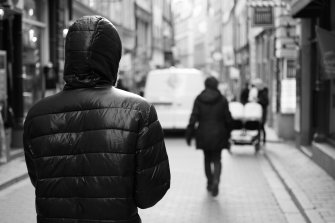 We’re hardwired to assume someone is staring from behind. Getty Images.

Psychology Professor Colin Clifford of the University of Sydney’s Vision Centre, found that when people can’t tell where a person is looking, they automatically assume they’re looking at them. “A direct gaze can signal dominance or a threat, and if you perceive something as a threat, you would not want to miss it,” he said. “So simply assuming another person is looking at you may be the safest strategy.”

Looking at someone is also a social cue. It usually means you want to talk to them. Since it’s our natural inclination to assume someone behind us is staring, the feeling we get may initiate a self-fulfilling prophecy. When we turn around, our action calls up the other person’s gaze. But when they meet our eyes, they give us the impression that they’ve been staring the whole time.

Another answer could be confirmation bias. We remember only the times we turned around and someone was staring (or appeared to be), and not the times they weren’t. And that weird, tingly sensation? It’s psychological and emanates from the thought of being stared at, not the physical act itself.

Unlike other world rulers, Genghis Khan was laid to rest not inside an elaborate mausoleum but an unmarked grave somewhere in Mongolia. Maybe.
Videos

Humans won’t survive if we stay on Earth. Michio Kaku explains.
▸
7 min
—
with
Michio Kaku
Up Next
Technology & Innovation

You Can Now ‘Shazam’ Plants and Animals with Your Phone

Don’t just point and shoot, point and learn! These apps are fun for nature lovers, and contribute to scientific databases of flora and fauna.