Eyebrows. You might not think much about them unless you have to manicure or shape them. Even then, they’re generally an afterthought. But have you ever wondered why in the world we have them to begin with? After all, our primate ancestors had hair all over their face. Why did it recede everywhere but at these two curvy places just above our eyes?

The initial response—one that your first-grade teacher may have given you—is they helped keep dirt and crud out of our eyes. But is that all?  According to a recent study published in journal Nature: Ecology & Evolution, it’s our ability to communicate with these furry accent marks that gave our species an evolutionary advantage.

Unlike Neanderthals and Denisovans, our closest hominin ancestors, who had strong protruding brow ridges, Homo sapiens had smooth foreheads that were smaller and higher in comparison. This allowed for movable eyebrows and so, nuanced communication. Eyebrow movements often portray friendlier rather than more aggressive emotions. Researchers in this study say that eyebrow communication helped Homo sapiens build larger social networks, which ultimately gave them a leg up in the survival game. 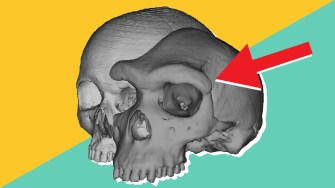 Researchers at the University of York in the UK conducted the study to investigate this eyebrow issue. The project was led by Paul O’Higgins, a professor of anatomy at the university. Using 3D engineering software, O’Higgins and colleagues borrowed the fossilized skull of an ancient hominin called Homo heidelbergensis. This hominin walked the Earth around 600,000 to 200,000 years ago. The fossil itself, housed at the Natural History Museum, is known as Kabwe 1. Researchers built a computerized model of it and studied its brow.

Dr. Ricardo Godinho, who worked on the study, explained the findings in a press release. “We simulated the forces of biting on different teeth and found that very little strain was placed on the brow ridge,” he said. “When we took the ridge away there was no effect on the rest of the face when biting.” This simple test eliminated two prevailing theories. The first is that prominent brow ridges were needed to stabilize the skulls of such hominins. The other theory is that protruding brows were required to fill the space where the eye sockets and the brain-case met.

By ruling out these biological theories, what was left was that brow ridges served as a form of social communication. Males, especially in other species, use such features to display dominance and ward off potential rivals during mating season. Think of a deer’s antlers, for instance, and how it uses them to do battle with foes. Our faces—rather than growing more menacing—have gotten smaller and softer over the last 100,000 years and particularly the last 20,000 years when we switched from a hunter-gatherer means of subsistence to an agricultural one. 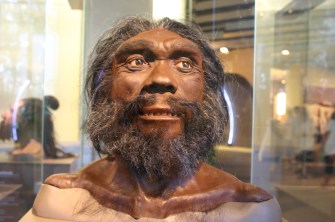 Dr. Penny Spikins, an archeologist, co-authored the paper. While all other hominin species died out, we prospered. She believes, our rise and their sunset occurred, due to superior human communication, which helped us connect better and form large social networks (of the actual real-life variety as opposed to the Zuckerberg variety).

“Eyebrow movements allow us to express complex emotions as well as perceive the emotions of others. A rapid ‘eyebrow flash’ is a cross-cultural sign of recognition and openness to social interaction and pulling our eyebrows up at the middle is an expression of sympathy,” she said in a press release.

Tiny movements of the eyebrows are also a key component to identifying trustworthiness and deception. On the flip side it has been shown that people who have had Botox which limits eyebrow movement are less able to empathize and identify with the emotions of others. Eyebrows are the missing part of the puzzle of how modern humans managed to get on so much better with each other than other now-extinct hominins.

Neanderthals had a good run. Think it was only their eyebrow shortcomings that threw them by the wayside? Why not consider the other theories posited here:

Related
The Learning Curve
Why do high IQ people stagnate in their careers? Emotional intelligence
Research suggests that emotional intelligence is more vital for success than IQ.
The Present
Even in the age of AI, some problems are just too difficult for computers
Computers are growing more powerful and more capable, but everything has limits
The Future
How the metaverse will revolutionize K-12 and higher education
Imagine going on a tour through the human circulatory system as a tiny cell. That is just one example of education in the metaverse.
Starts With A Bang
Ask Ethan: What are white holes, and do they really exist?
In General Relativity, white holes are just as mathematically plausible as black holes. Black holes are real; what about white holes?
Life
Strange life forms create an “alien” ecosystem in an abandoned uranium mine
Slimy biofilms made up of bacterial and eukaryotic life forms have taken over an abandoned, flooded uranium mine in Germany.
Up Next
Politics & Current Affairs
John Boehner—former GOP mouthpiece—wants to legalize weed
Hey. Remember former Speaker of the House John Boehner? The guy who famously said that he was “unalterably opposed” to legalizing marijuana? Well, now he’s a huge pothead.