Bullies are the bane of many a high schooler, and they also apparently have more sex that their less aggressive and manipulative counterparts. That’s according to a new study published in the journal Evolutionary Psychological Science.

Researchers, led by Daniel Provenzano from the University of Windsor in Canada, found that bullying might have evolved as a behavior for men to assert dominance and show their strength, while signaling to women that they are good prospective mates who will provide for their needs and offspring. If you think about the issue from an evolutionary perspective, say the scientists, a male’s dominance is meant to make him more attractive to sexual partners and scare off any rivals.

The study involved two sets of young people – a group of 144 whose mean age was 18.3 and a larger colort of 396 adolescents with a mean age of 14.6. The participants filled out questionnaires on their sex life and bullying incidents. This allowed the researchers to zero in on personality differences that make one more likely to be a bully in order to win over sexual partners. 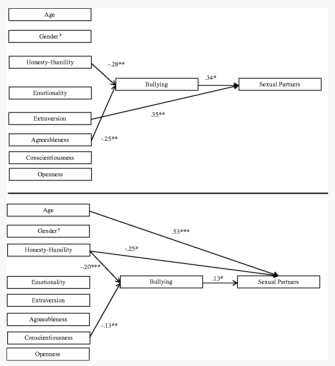 The research team found that younger people who were scoring lower in “Honesty-humility” were more likely to bully others to get more sexual partners.

One reason these adolescents bully others is to display strength and dominance in order to attract the opposite sex. They might threaten rivals or put them in a bad light to increase their own chances.

You can read the study from the scientists here.

Related
Strange Maps
The horrors of World War II air war, in one stark map
This graph shows how badly German cities were hit by Allied bombing raids.
Hard Science
Subatomic ghosts shed new light on the structure of protons
A Fermilab study confirms decades-old measurements regarding the size and structure of protons.
The Present
The Taoist philosophy behind Alibaba, China’s e-commerce giant
Alibaba has played a key role in China’s meteoric economic rise.
The Well
Can we condition ourselves to be heroes?
Neuroscientist Robert Sapolsky on the science of temptation, and the limitations of your brain’s frontal cortex.
▸
6 min
—
with
Robert M Sapolsky
Thinking
3 brain games to practice deductive, inductive, and abductive reasoning
Take a closer look at the different types of reasoning you use every day.
Up Next
The Present
Elon Musk Is Now Linked to the Mystery of Who Invented Bitcoin
Did Elon Musk invent Bitcoin? The mystery surrounding the creator of the world’s most popular cryptocurrency deepens.