As the second great space race fires up, lovers meeting in micro-gravity will be far more likely. Plans are being made to go back to the moon, visit and colonize Mars, mine asteroids, and more. For astronauts, there are a lot of health concerns, such as the constant bombardment from solar radiation. With simple survival on most space-oriented minds, one aspect that’s often ignored is sex. But it’s a major part of the human experience. In sci-fi movies, couples float around in tantalizing embrace, a prospect that seems almost superhuman. So can you even have sex in space? And if so, what would it be like?

It could be possible that it’s happened already, though it’s rather unlikely. The first mixed gender mission occurred back in 1982. NASA hasn’t had any such reports then or since. It also discourages marriages or couples and asks astronauts to abide by a strict code of conduct. Let’s face it, the last thing you want is a couple’s spat eclipsing a mission.

Former astronaut Leroy Chiao took part in four missions between 1994 and 2005. In a blog post in 2009 where he expressed serious doubts of anyone successfully attempting it. Besides astronauts being professional at all times, the rigorous work schedule, and it being generally frowned upon, “Guys are guys,” Chiao wrote. “If a guy had sex in space, he would not be able to stand not bragging about it. We would all know about it. Or, I should say, we will all know about it when it happens.” 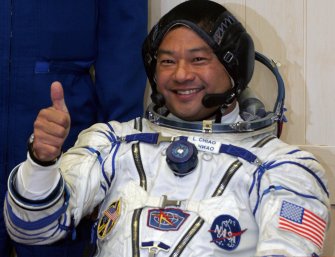 So far, NASA hasn’t conducted any sexual experiments in space either, despite rumors of a secret US-Russian sex experiment. At a 2006 conference, NASA physician Jim Logan admitted that studying sex and other biological aspects of life in space is a prerequisite to our future plans of settling among the stars.

Theoretically speaking, a number of problems stand in the way of a successful sexual encounter in space. For instance, a micro-gravity environment can make one nauseous. Usually, you get used to it. But you’ll want to save the bedroom acrobatics until you’re back on Earth. Then there’s space anemia, which can leave you exhausted. In zero-G, the heart beats less, which lowers the production of red blood cells—leading to space anemia. As such, a rigorous shagging is not in the cards. You’ll both tire too easily.

Blood flows differently in space too. On the ground, it mostly collects in the lower half of the body. In space however, it has a tendency to float up. And nothing says sexy like that puffy faced, puffy neck look. Another problem is that pressure changes can affect the spinal cord, causing vision problems. 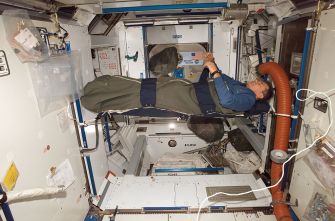 Not a lot of room to maneuver in a space-oriented sleeping bag. European Space Agency (ESA) astronaut Paolo Nespoli takes a nap on the International Space Station (ISA). 2007. NASA.

If you think your boo will be like an angel floating towards you, think again. You two had better strap in or else your partner is bound to bounce off of you and float away. You’ll struggle to get together and stay together. Special straps would be required. Or else you’ll end up like two slow-motion bouncy balls, smacking into walls and into each other at a comically slow pace.

On the social end, it’s also not like you get a lot of privacy on a space station. And the panel and sleeping bag beds used today don’t fit two. Beyond that, should you be successful, you’ll work up a sweat. Air doesn’t flow evenly in space as it does on Earth, what’s known as natural convection. Instead, your body heat sticks to you. And that’s not all.

Consider that instead of falling off of and evaporating, in space, your sweat is likely to stick to your body. The more that’s produced, the more you’ll accumulate. That means pools of sweat will be gathering on your skin and blobs of it might fly around the room. But we still haven’t gotten to the worst part. 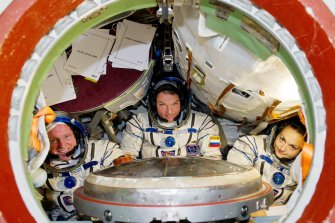 Members of the ISA August 2014. It isn’t only a lack of privacy that prevents space sex. Getty Images.

Blood flow is really important for erection formation. Since it’s so different in space, some scientists question whether forming one is even possible in a micro-gravity environment. Many agree that for most men, the feat will prove difficult. Of course, there’s always Viagra. The dosage will have to be worked out, though. Men won’t be the only ones having a problem.

Female lubrication is pivotal to a successful encounter. But instead of being distributed evenly around the vagina, in micro-gravity, it’ll tend to ball up in one spot, making penetration painful. Luckily, space stations are being designed which rotate, so they can create any level of gravity desired, including that of Earth.

In this, civilians with serious cash flow may get to experience sex beyond Earthly bounds sooner than even astronauts. Billionaire Robert Bigelow plans to put a hotel in orbit within the next few years. He’ll have competition. Virgin Galactic is also planning a suborbital space hotel. Such a station is probably years away. Until that time, sex in space will likely remain a territory only of our imagination.

The massive craft could carry 100 humans to Mars and revolutionize space exploration.
Up Next
Hard Science

Scientists Make a Breakthrough in Teleportation

Chinese scientists accomplish the feat of teleporting a photon to a satellite hundreds of miles above Earth.