It is often claimed that Einstein was a poor student who flunked math. This old story is false and Albert laughed after hearing about it. In fact, he had mastered calculus by high school and was able to understand the nearly incomprehensible philosophy of Immanuel Kant at age 13. Most adults I know can understand neither of those things.

It is true that he didn’t care for school, however. The Teutonic schools of his youth were all the opposites of what he needed. The strictness of the authorities, the regimental nature of the day, and the rote learning style clashed with his abstract genius and tendencies to daydream. While Einstein’s brilliance was able to survive this horrid environment, God only knows how many great minds didn’t.

Dr. Einstein had his own ideas on how education should be structured, as he explained in a speech given at The State University of New York in 1931.

What does the good doctor say?

He admits that the things he has to say are merely his opinion and that he is practically a layman when it comes to education. However, he also argues that an enterprise such as education requires more than specialists to accomplish and that his ideas might be worth hearing out.

As you might expect, he wanted a school with less standardization and rote learning and more general preparation for living and learning for the rest of your life. He believed firmly in the idea of using the educational system for the development of the individual as an autonomous critical thinker. In his speech he places the utmost importance on it, saying that “The development of general ability for independent thinking and judgment should always be placed foremost.”

In response to those who think education should be focused on technical training for later employment, he says simply, “If a young man has trained his muscles and physical endurance by gymnastics and walking, he will later be fitted for every physical work. This is also analogous to the training of the mind and of the mental and manual skill.” He then further objects to making schools job training programs with two retorts. “The demands of life are much too manifold to let such a specialized training in school appear possible” and “it seems to me, moreover, objectionable to treat the individual like a dead tool.” 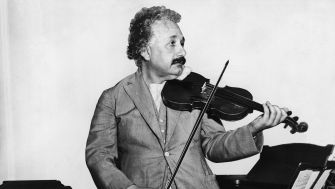 Einstien playing the violin on route to America. Just because a person focuses on the natural sciences doesn’t mean they shouldn’t also study other subjects. (Getty Images)

He also has an eye towards the “learning by doing” method of John Dewey when he declares that, “The most important method of education accordingly always has consisted of the where the pupil was urged to actual performance.” For Einstein, concepts must be applied to be real. There is no pointing in learning multiplication tables if you can’t work out equations too. His view on education is, therefore, both geared towards the general development of the person and the practical application of the subject matter.

He expressed similar ideas in his political essay “Why Socialism?”  where he argues for an education system that helps foster the individual that they might then be able to work for the betterment of all mankind.

Is there a method to this madness or is he just reacting to the harsh Germanic schools of his youth?

His motivations behind his support for this type of school system are too well thought out to be dismissed as reactions. In this speech as well as his political essay he expresses the need for education to help promote the common good, something which high functioning individuals who have been educated in a way that allows for critical thinking can do best. As the essay was written more than a decade after this speech was given, there seems to be lasting consistency in his thought.

While nearly everybody who attended school will have some opinion on how education might be improved, the opinions of a genius like Einstein might warrant a little more of our attention. Despite being a student of the sciences and the product of a very strict school system, Albert Einstein encourages us to gear our education system towards the development of the entire individual and not on just on the technical skills they need to find work. He also encourages us to avoid dull rote learning and robotic memorization.

If we are to take his advice or not is another question, but the supporters of a complete education may smile, knowing that they have Einstien on their side.

Related
Neuropsych
Daily caffeine intake temporarily alters your brain structure
Compared to people who took a placebo, the brains of those who took caffeine pills had a temporarily smaller gray matter volume.
Thinking
Why you should laugh at yourself, according to Seneca and Nietzsche
“It is more human to laugh at life than to lament it.”
Hard Science
The violence of the Tonga eruption is a wake-up call to watch other submarine volcanoes
Out of sight, but not out of mind.
The Present
How circular economics can make us happier and less stressed
Entrenched business wisdom says that community-led economic systems are pure fantasy. Douglas Rushkoff disagrees.
The Learning Curve
The art of asking the right questions
The right questions are those sparked from the joy of discovery.
Up Next
Starts With A Bang
How Stephen Hawking’s Greatest Discovery Revolutionized Black Holes
Before Hawking, black holes were just static points in the background of space. His greatest scientific legacy taught us just how dynamic they are.In 1915, Albert Einstein published his General theory […]