For decades, you’ve probably heard the advice to eat hours before heading off to bed. This folk wisdom has mostly been applied to losing weight, avoiding acid reflux, and getting a good night’s sleep. Now a new study offers an even more profound piece of evidence as to why an early dinner is essential: it reduces the risk of breast and prostate cancer.

The study, conducted at the Barcelona Institute for Global Health—if you’ve ever been to Spain, you know that most restaurants don’t open for dinner until 8 pm—found that those who eat dinner before 8 pm (or at least two hours before bedtime) experience a 20 percent reduction in the likelihood of developing the types of cancer listed above.

There have long been correlations between types of diets and cancers. Lead author Manolis Kogevinas, an ISGlobal researcher, wanted to better understand if dining according to a daily rhythm influences the disease. He comments:

Our study concludes that adherence to diurnal eating patterns is associated with a lower risk of cancer. [The findings] highlight the importance of assessing circadian rhythms in studies on diet and cancer. 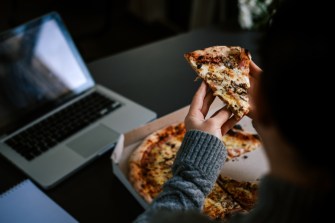 Of course, there are many variables as to why cancer manifests. Fans of the Occam’s Razor theory of disease have to recognize that cancer rarely has a singular cause; a combination of variables often contributes to its onset. For this study, the researchers investigated data from 621 cases of prostate cancer and 1,205 cases of breast cancer, alongside 872 male and 1,321 female controls between the years of 2008-2013.

They note that in 2007 the International Agency for Research on Cancer, which is part of the World Health Organization, classified shift work as likely carcinogenic to humans (based on animal trials). (The control group for the above study never worked late shifts.) For workers who work late or overnight, their chronotype is negatively affected by this adaptation to their body’s circadian rhythm.

Specifically, considering that humans evolved with a diet that required intermittent fasting, the consumption of late-night meals has been associated with elevated leptin and glucose levels as well as systemic inflammation. Based on their results, the researchers found that the longer the space between your last meal and sleep, the less likely you were to develop these cancers.

Kogevinas remarked that the results “will have implications for cancer prevention recommendations, which currently do not take meal timing into account,” adding that, “the impact could be especially important in cultures such as those of southern Europe, where people have supper late.”

He believes cancer researchers and organizations must now consider the timing of meals into their recommendations moving forward, pending further research, of course.

Women have made incredible gains into STEM fields, but they continue to face gender biases in the workplace.
Up Next
Mind & Brain

Can you recover from schizophrenia? A Norwegian study suggests you can

Thanks to work programs and medication, a study conducted by the University of Oslo is seeing big changes in participants lives.