A heroin ‘vaccine’ will soon be in testing for humans, and already has been successfully tested on rodents and non-human primates.

For years, naloxone (brand name Narcan) has been available as an injectable antidote to fentanyl, heroin, or opiate overdose. Hospitals, clinics, EMTs, and some police departments have used it to save lives when they encounter somebody who has overdosed or is about to. There are also substitute drugs, such as methadone, intended to slowly wean patients off opioids so as to avoid severe withdrawal symptoms, and other drugs such as Vivitrol that block opioid receptors from releasing dopamine, negating the effects of opiates.

What’s different about this vaccine is that it trains immune system antibodies to recognize and then bind to heroin molecules (or fentanyl and other opiate molecules) to block the drug from getting to the brain. The high doesn’t happen.

This will not only help prevent overdoses but, just as crucial, it will help recovering addicts to keep from using again—a common problem—since the receptors just won’t… well, receive. 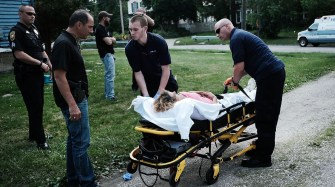 The Ohio rust belt struggles with opioid addiction and poverty. Medical workers and police treat a woman who has overdosed on heroin, the second case in a matter of minutes, on July 14, 2017 in Warren, Ohio. According to recent statistics, at least 4,149 Ohioans died from drug overdoses in 2016, a 36% leap from just the previous year and making Ohio the leader in the nation’s overdose deaths. (Photo by Spencer Platt/Getty Images)

The basis of the idea, hatched by chemist Kim Janda, Ph.D., and published this week at The Scripps Research Institute, is to treat the drug as something the body will reject as foreign, much like a virus, bacteria, and similar invaders.

“With vaccines against drugs of abuse, the drug itself does not cause an immune response. So if a virus attacks you, our immune system is alerted and tries to remove it. But with drugs that is not the case. The vaccines just train the immune system to recognize the drug as foreign and try to remove it,” he told the Houston Chronicle.

He then described what happens after the vaccine is administered:

“The antibodies are already basically in the body and when you take the drug into the bloodstream they bind to it and stop it from crossing over the blood-brain barrier to get to the reward and pleasure centers… We’re using what nature has evolved for us to combat viruses and bacteria.”

It’s a fascinating and unique approach to abuse and overdose, and one that has great potential, since the vaccine can be stored at room temperature for 30 days and can be used to help anybody who wants to stop their addiction.

The effect on overdosing was not expected by his team. It has everything to do with breathing and how opioids affect that function. In short, when people die from opioid overdose, the drug so powerfully compromises the central nervous system that breathing stops. This vaccine mitigates that effect.

According to Janda, the vaccine was developed initially for third-world countries and is therefore likely to be inexpensive. It’s just a few years from actually being available on the market, after human testing is completed.

Related
The Past
The Wild West was lawless and chaotic — and the police helped keep it that way
Lawmen and outlaws were often the same people.
Thinking
6 great philosophers and how they used their political power
Most philosophers merely contemplate the world, but what about the ones who actually tried to change it?
Neuropsych
Asthma drug brings back “lost” memories
In a study involving mice, scientists used two different techniques — one optogenetic and one pharmacologic — to recover “lost” memories.
Stoicism: How to turn your sadness into strength
Chloé Valdary shares the ancient Stoic principle that can defeat modern despair.
▸
7 min
—
with
Chloé Valdary
Hard Science
3 new studies indicate a conflict at the heart of cosmology
The Universe isn’t as “clumpy” as we think it should be.
Up Next
Politics & Current Affairs
Was the Incan Empire a socialist paradise?
The Incan Empire had many amazing monuments and lasting achievements. One of the more fascinating is how the Inca managed to run such a large empire without a market economy.