A paper published in Nature Reviews Neuroscience last week addressed the prevalence of neuromyths among educators. The paper has been widely reported, but the lion’s share of the coverage glossed over the impact that neuromyths have had in the real world. Your first thought after reading the neuromyths in the table below — which were widely believed by teachers — may well be, “so what?” It is true that some of the false beliefs are relatively harmless. For example, encouraging children to drink a little more water might perhaps result in the consumption of less sugary drinks. This may do little if anything to reduce hyperactivity but could encourage a more nutritious diet which might have impacts on problems such as Type II diabetes.

So, what’s the harm?

The paper addressed a number of areas where neuromyths have had real world impacts on educators and policymakers, which may have resulted negatively on the provision of education. 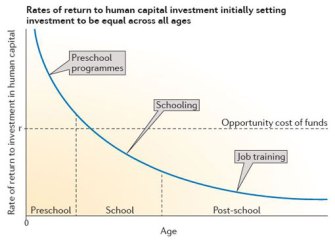 The graph above, reprinted in the Nature Reviews Neuroscience, paper has been included as empirical data in educational policy documents to provide evidence for an “allegedly scientific argument for withdrawing public funding of university education.” The problem? The data is made up. The graph is in fact a model that is based on the false assumption that investment before the age of three will have many times the benefit of investment made in education later in life. The myth of three — the belief that there is a critical window to educate children before the age of three, after which point the trajectory is fixed — is one of the most persistent neuromyths. Viewed on another level, while some might say investment in early education can never be a bad thing, how about the implication that the potential of a child is fixed at such an early point in their life, when in reality their journey has just begun.

Inside schools, neuromyths have resulted in time and money wasted on interventions that simply don’t work. Terms from neuroscience are used to bamboozle teachers in marketing material that promises magic bullets but doesn’t deliver. Tinted overlays for children with dyslexia have provided no benefits when tested in a double blind study, yet such techniques continue to be used. 39% of teachers have used Brain Gym, an educational tool that involves techniques such as massaging “brain buttons” on the body to activate specific parts of the brain. The tool has no neuroscientific basis. The time and money wasted on expensive and unproven techniques such as these could have been used for real education. 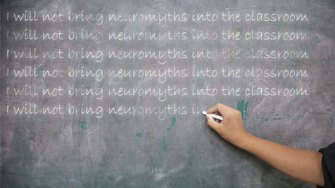 Earlier this year I published a post summarizing the recent developments in what teachers need to know about neuromyths. If the results of the Nature survey are anything to go by, its time for teachers and policy makers to do their homework.

When justice isn’t tempered by something such as mercy, forgiveness, or nonviolence, efforts to make society more equitable often backfire.
Up Next
Technology & Innovation

Entrepreneur Sets Up Fund to Invest in “Sci-Fi” Start-ups

Serial tech entrepreneur Bryan Johnson has established a $100,000,000 fund to support start-ups that seek to bring about a sci-fi future in the present.