Neuroscientists at Oxford just discovered how your brain moves memories into long-term storage. It’s called an anti-memory, and it’s more helpful than it sounds.

Memories, at their most basic, are electrical impulses. But what happens if those impulses are always firing? Would they overload your brain the same way that running too many programs on your computer would fry its RAM? The answer is yes. Scientists think that these overly excited neurons could be the culprits behind conditions like epilepsy, schizophrenia, and autism. The balancing agent that keeps that from happening are anti-memories.

Think of them as defragging a memory’s RAM. Anti-memories are neurons that lower the electrical activity generated by memory creation. Anti-memories work together with memories to keep the brain from getting overloaded. They don’t affect memories; they just silence the process running them so your brain can do other things.

When you form a memory, your brain assembles it from different parts of your brain, rebuilding it each time from scratch. There are three steps to building a memory — encoding it (intentionally committing it to memory), consolidating it (different parts of the brain acting gluing the memory together) and retrieving it (recalling the memory). Every time you retrieve a memory, you increase your brain’s ability to recall it by strengthening the neural pathway to that memory. That makes the memory stronger and easier to recall in the long run. Here’s a quick primer:

Anti-memories work in the same way, just in reverse. Scientists had long theorized their existence from models and studies on mice. Neurologists at the University of Oxford were finally able to observe them in humans with this experiment, whose findings were published in the journal Neuron. Lead author Helen Barron explains the process in a press release:

To measure these links, or associative memories, we use a technique called repetition suppression where repeated exposure to a stimulus – the shapes in this case – causes decreasing activity in the area of the brain that represents shapes. By looking at these suppression effects across different stimuli we can use this approach to identify where memories are stored. 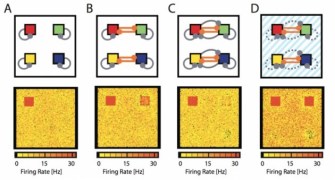 The memory paths identified in the study. Credit: Neuron

The researchers were able to do this by observing participants’ brain activity as they memorized the shapes using functional magnetic resonance imaging (fMRI). Over time, the anti-memory neurons kicked in and blocked the memories of the shapes. “Over 24 hours, the shape associations in the brain became silent,” said Barron. Most interestingly, they didn’t look like additional memories; they looked like an absence of brain activity. They’re not – they’re just active on the same neural path. Think of it as someone retracing their steps, like this:

“The Shining” via GIPHY

That could have been because the brain was rebalanced or it could simply be that the associations were forgotten. The following day, some of the volunteers undertook additional tests to confirm that the silencing was a consequence of rebalancing. If the memories were present but silenced by inhibitory replicas, we thought that it should be possible to re-express the memories by suppressing inhibitory activity.

In order to re-express the memories, researchers used transcranial direct current stimulation (tDCS) to apply a low current of electricity to the volunteers’ brains. By doing this, the researchers reduced the activity of the anti-memory neurons — and the memories of the shape associations came back.

“This result is consistent with a balancing mechanism,” Barron says. “The increase in excitation seen in learning and memory formation, when excitatory connections are strengthened, appears to be balanced out by a strengthening of inhibitory connections.”

While the sample size for this study was small, the research team has big hopes for their findings. “The paradigm has the potential to be translated directly into patient populations, including those suffering from schizophrenia and autism,” said Barron. “We hope that this research can now be taken forward in collaboration with psychiatrists and patient populations so that we can develop and apply this new understanding to the diagnosis and treatment of mental disorders.”

The high pitches from the flute and the harp would reach your ears before the notes from the tuba and the cello.
Up Next
Surprising Science

People Have Been Hearing This Hum for Years. No One’s Sure What It Is.

A mysterious, unidentifed, low-frequency hum as been baffling people for years.