Last week I wrote about Google’s super neat Project Jacquard, which is basically wearable technology for people who aren’t all that interested in wearable technology. I posited that the trick to getting the public interested in wearables is to keep things subdued, to rein in the bells and whistles. Novelty, after all, only gets you so far. If you want to make a form of technology ubiquitous, you have to first make it innocuous.

Well, here’s a counterpoint to that assertion: Accessories like to be loud.

There’s a difference between what a smartwatch offers versus what a handbag offers, the former being a convenience gadget and the latter serving unique roles related to both form and function. Purses and handbags are devices of self-expression as much as they are receptacles for your stuff. And as technology begins to invade the many staple objects of our everyday lives, there’s little reason to believe it won’t also stage a coup of fashion.

What will the future of wearable tech accessories look like? For a start, we could look to a new line of handbags from a company called VanDerWaals, named for the Dutch theoretical physicist who won the 1910 Nobel Prize for his equation of state for gases and liquids. While the VanDerWaals name has that cosmopolitan sound that marketing execs must love, the label is fitting given the bag’s main claim to fame: the ability to change color on a whim.

Each bag is equipped with fancy patented technology that takes a normal-looking leather bag and turns it into something off a NeoTokyo runway. The design is app-enabled, so if you decide the red dress looks better than the blue one, all it takes to create a matching purse is a swipe of a thumb on your smartphone. It’s also got a phone charger inside that connects with a long-lasting battery within the lining. The thing is 21st century form, 21st century function. 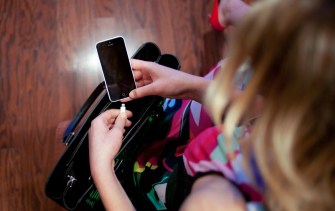 Since we’re big disciples of disruption here at Big Think, we like to view innovative new technologies through that sort of lens. What VanDerWaals represents — at least on its surface — is an attempt to reinvent expectations for everyday objects. In this case, it’s handbags.

To use an admittedly base example: Do you remember when the first time cupholders showed up in cars? It was a simple little addition that soon became the expected norm. You can now hardly find a model on the lot without one. At what point will it become expected that every bag be able to keep everything inside charged? Could app-enabled bags be the future? When we see a product like VanDerWaals, it’s fun (and often easy) to project the pervasiveness of its technology, or at least the ideas behind that technology.

One of those primary ideas is customizability. Every day we communicate interpretations of ourselves through our possessions. The bag around your shoulder, the hat upon your head — even unconsciously these items represent the outward extension of the characters we wish to play in this world. The chameleon-like technology in VanDerWaals makes fine-tuning that message a breeze.

The next logical step beyond high-tech bags seems to be color-changing T-shirts or something in that vein. What’s exciting here is how technology is creating a whole new dialect for fashion and self-expression. We’ll have to see if other companies pick up on VanDerWaals’ approach, as it takes a village to turn an idea into a trend. My guess would be that these sorts of items will indeed become more popular in the future, especially if similar products continue to reinvent everyday objects. This is where function meets up with form, and then innovation pops by to make a trio.

And who knows, maybe this sort of thing will really take off. We’ve seen some really weird trends blow up in the past. If leg warmers and emo haircuts can be a thing, why not LED accessories? 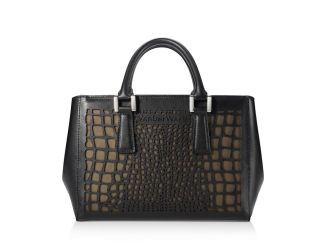 How else can we expect technology to influence the culture and logistics of fashion? According to Singularity University’s Peter Diamandis, virtual reality will spur momentous exponential shifts in the clothing industry. So momentous, you’d hardly be able to recognize the clothing store of the future.

Each week on Think Again, we surprise some of the world’s brightest and most energetic minds with an idea they’re not at all prepared to discuss.

Join host Jason Gots and special guests including Bill Nye, Henry Rollins, Jason Silva, and many more each week for a spontaneous journey of intellectual surprise, discovery, and occasional bewilderment, as we go boldly where no talk show has gone before.

Image credit: Luca Pozzi, via http://science.psu.edu/alert/photos/research-photos/physics/Ashtekarearlyuniversepozzi.jpg/view.If String Theory has nothing to do with reality, what are our options?“I just think too many nice things have happened in string theory for […]