We are coming up on the 35 year anniversary of the very first recorded cases of HIV/AIDS, and the fearful epidemic in the aftermath. This is a disease that has taken the lives of 39 million worldwide, and infects around 37 million currently. The source of HIV has been identified as the bush meat of a chimpanzee sold in a West African market in the 1900’s. Yet, cases in the U.S. didn’t surface until the early 1980‘s. On June 5, 1981 the CDC reported a rare lung disorder which had taken the lives of a few gay men in Los Angeles. Five cases of what at the time was called Pneumocystis carinii pneumonia (PCP) were reported.

One month later, five more cases appeared in LA. In August, 100 gay men were found to be infected with this new form of pneumonia. Half of them succumbed. By the end of that year, 121 gay men were snuffed out by the disease and the nation was in a panic. The epidemic was named by 1982, and the virus isolated by 1984. In 1986, the name HIV surfaced. By the end of the decade, 27,408 people had died of AIDS.

Those diagnosed with HIV at that time had no hope of survival. Today, people with HIV are living normal, healthy, complete lives through a combination of two drugs, a therapy known as pre-exposure prophylaxis (PrEP). These are administered conveniently in one pill, whose brand name is Truvada. The medication can make one’s viral count so low it is nearly undetectable. It can also prevent transmission, if taken regularly, for those who are at risk.

Even though modern medical science can limit the virus’s impact, the big question is if and when will we see a cure for HIV or a vaccine to prevent it. Unfortunately, over the past few decades, little has been invested to find a cure. Instead, governments and other funding organizations have focused on providing care for the poor and vaccine development. That all changed in 2008.

American translator Timothy Ray Brown, known as the “Berlin Patient” underwent a bone marrow transplant for leukemia that year, and was miraculously found to be HIV free afterward. Soon, it was discovered that one percent of the Caucasian population carried a genetic mutation which made them resistant to HIV. This surrounds the protein CCR5, which resides on top of killer T-cells, the immune system’s soldiers. HIV uses this protein to enter these cells. But those with a certain mutation lack this protein and so the virus has no way of entering. Now scientists had a pathway and hope for a possible cure. Though experiments using CCR5 haven’t bore fruit, there are some of other strategies which hold promise.

Antiretroviral drugs (ART) such as PrEP can stop the virus from reproducing. Even so, the remaining viruses lie dormant within the body in what are known as HIV reservoirs. They bide their time, in hopes that the environment will once again be right to resurface and take over. Understanding this, the “shock and kill” strategy has been developed. Here, a certain drug shocks the virus out of dormancy and its hiding place, in order to have it recognized by the immune system, who can come in and mop it up. Researchers admit that they have to learn more about where these HIV reservoirs, where they are, and how to detect how many viruses are hiding there. As for the kill portion of the strategy, specific antibodies have to be introduced to the immune system to help it identify and kill the virus.

An option for locating reservoirs may have been discovered. HIV often hides in a cell’s capsid. This is the area where genetic material is stored. Using supercomputers, Researchers at the University of Illinois, Urbana- Champaign were able to create a formula which may be used to help reveal a virus hiding within a cell’s capsid. So far, it has only been tested in computer simulations. 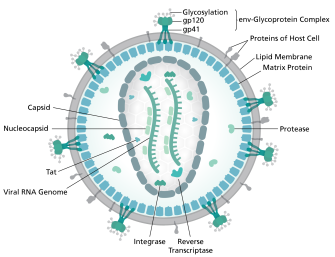 HIV virion or the virus outside of an infected cell.

Another possible strategy is maturation inhibitors. These stunt a virus’s growth, rendering it impotent. The idea is only in the conceptual phase. Yet, if this were combined with other therapies, HIV may be eliminated from the body. A third possibility is to attack HIV on the genetic level, by using a brand new technique called gene editing. One might snip out certain genes in the DNA of a virus within an infected cell so as to render it harmless.

Just recently, a team of researchers within a division of the NIH has announced a new pathway toward a vaccine. They discovered a place on the virus to target and an antibody which can bind to the site, in order to neutralize the virus. Researchers in Vaccine Research Center (VRC) of the National Institute of Allergy and Infectious Diseases conducted this study.

What they discovered is called a fusion peptide. This is a bundle of eight amino acids which help the virus adhere to the cell it has chosen to infect. This peptide has a simple structure, making it the ideal entry point for a vaccine to infiltrate. To conduct the study, researchers examined the blood of a person infected with HIV. Not only did they find the virus’s soft underbelly so to speak, but a powerful HIV antibody which they named VRC34.01. Researchers showed that the antibody will indeed bind to this fusion peptide. Now the team is working on developing a vaccine.

HIV/AIDS has proven one of the most challenging diseases medical science has ever encountered. Even so, over three decades after it was first discovered, we are now beginning to gain new insights into this disease at a more rapid pace, with the possibility of a vaccine and even a cure on the horizon, which someday soon may be within reach.

“Salvator Mundi” sold for a record-breaking $450 million in 2017, but is it really as valuable as people were led to believe?
Up Next
Personal Growth