For us humans, the aurora borealis is a phenomenon of wonder: undulating swaths of green and red above the northern horizon, produced by charged particles and radiation from solar flares hitting our upper atmosphere, drawn magnetically to our northern and southern poles (for the aurora australis). After recent reports of three massive solar flares heading toward earth, many of us in the Northern Hemisphere hit the road late at night, hoping to be fortunate enough to experience the phantasm-like rippling ribbons of light. For other animals, though, the northern lights may mean something entirely different: What produces them may be what’s causing whales to fatally beach themselves on ocean shores. 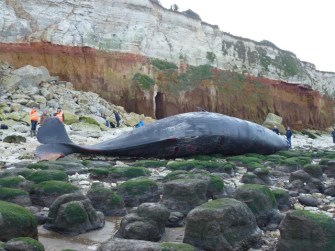 During January of 2016, over two dozen whales became stranded on the shores of the North Sea in the Netherlands and England. It’s usually a fatal mishap, since a whale’s physiology relies on the bouyancy of the ocean to keep its massive weight — up to 45 tons — from crushing its own organs and damaging muscles, which causes the release of deadly myoglobin. The protein causes kidney damage in the whales, which along with dehydration, is what what typically kills them. Even a whale discovered immediately after stranding faces long odds of survival, since its massive size makes returning it to the sea difficult.

But why? Several possible culprits have been suggested, including toxins released into the environment by algae, the noise produced by human shipping traffic and submarines, and shallow ocean areas that absorb and reduce the audibility of their communications — acoustic clicks — confusing the leviathans as they navigate.

Researchers studying the 2016 strandings, though, have found what they believe is the true cause: The same geomagnetic disruptions that produce the northern lights is distorting the magnetic grid by which whales may navigate. This could also explain why whales often re-strand themselves after an initial rescue. In research published in the International Journal of Astrobiology, Klaus Vanselow of the University of Kiel in Germany and his team think they’ve worked out what’s going on.

Sperm whales don’t normally live in the North Sea. They mostly just pass through en route to the abundant quantities of squid near the North Pole, squid being their primary winter and spring food source. In fact, it’s mostly young male whales from 10 to 15 years old who make the trip; females stay in the temperate or warm waters elsewhere. (Whales live in all of the earth’s oceans.) 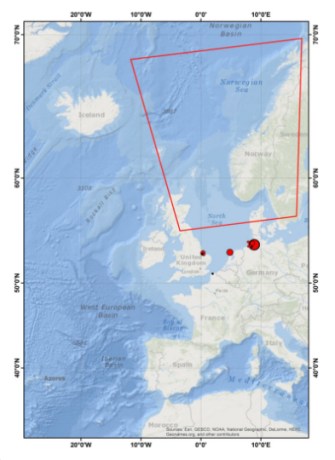 Based on research involving other animals believed to navigate magnetically — such as birds, bees, and cetaceans — Vanselow believe whales follow the earth’s magnetic field to find their way north, using permanent magnetic anomalies as landmarks that help them make course adjustments as needed. He says that “in the open sea depth, maps often look very different from geomagnetic anomaly maps of the same area,” and thus the variations add an additional layer to a whale’s sense of where it is and where it’s headed.

He asserts that the “random and abrupt” solar flares produce sufficient new, temporary anomalies to disorient the whales, causing them to make navigational mistakes and throwing them lethally off-course. If he’s right, the stranded whales have no idea they’re heading for the beach.

The problem is most critical in relative proximity to shorelines, since “whales in the open sea presumably switch to a more reliable navigation system if they realize their orientation is wrong.” Other studies have shown that migrating birds can perform such self-corrections.

Vanselow’s conclusions are based on correlations between two solar storms on December 20/21, 2015 and December31, 2015/January 1, 2016 and the strandings that occurred in January. Analyzing magnetometer data from a station at Solund, Norway, they were able to calculate the locations of anomalies produced by the flares. 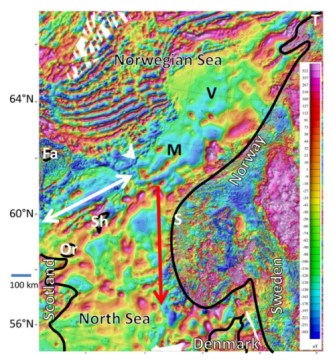 The first magnetic storm was more intense, but the second one last longer. They believe that whales actually got lost near Solund, where the most extreme impact occurred.

In hell, we assume a position of moral superiority, looking down over the sinners and the poor decisions that led them to this wretched place. In heaven, Dante is looking down upon us.
Life

Start fighting back against planned obsolescence.
Starts With A Bang

It's been precisely 13.8 billion years since the Big Bang occurred. Here's how we know.
Up Next
Mind & Brain

How Caffeine Tricks Your Taste Buds and Your Brain