5,000 years ago, people were much shorter than they are today. It’s estimated that the average European height then was about 5’5″. So the giant skeletons found in southeast China are somewhat shocking: These folks seem to have been nearly 6′ tall, with one reaching 6’3″. Even today, the average height in the region is just 5’9″. 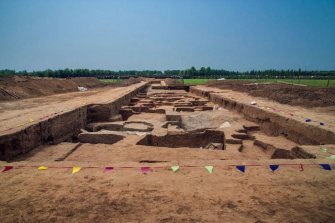 Yang suggests the stature of the area’s inhabitants may have been a result of the stable food supply people of the Longshan Culture enjoyed. As Fang told China’s state-run news agency Xinhua, the area was “already agricultural at that time, people had diverse and rich food resources and thus their physique changed.” Still, today’s residents of Shandong clearly have far greater access to healthy foods, so this doesn’t explain the puzzle of why the giants’ better-fed and -cared-for descendants are so much shorter.

Fang notes that exactly where the Liaojia skeletons have been found may offer another clue. The tallest individuals were found in the most spacious resting places, suggesting they were persons off high rank. Does that mean that, as such, they were fed the very best available foods and provided a life of comfort, or could it as likely be the other way around: That their natural height conferred a high social status upon them? 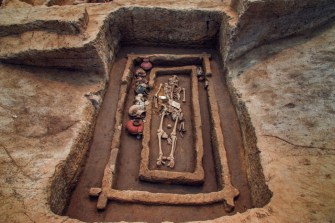 In any event, throughout Jiaojia, homes look to have been uncharacteristically comfortable for the period, with modern amenities such as separate bedrooms and kitchens. The artifacts found in the homes are intriguing as well. Pig bones and teeth suggest that the people raised livestock. Longshan culture is also known as Black Pottery Culture, and there’s lots of colorful pottery to be found at Jiaojiia, as well as objects carved from jade. 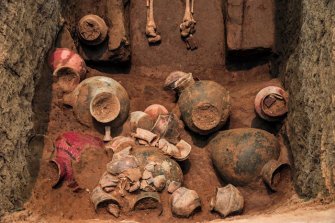 In the funerary sites, some skeletons and belongings appear to have been deliberately damaged at burial. Fang’s team wonders if the weren’t defaced as an expression of local power struggles.

For now, much remains unknown about the people of Jiaojia and why they were so tall if further study confirms that they were. Only about 2,000 square kilometers of the vast site have been excavated so far, and what has been dug up hasn’t been peer-reviewed yet. So this is still early days in our understanding of what life was like in Shandgong Province five millennia ago. Who were these giants? And where did they go?

“The pulsar sort of consumes the thing that recycled it, just as the spider eats its mate.”
Neuropsych

Your old-fashioned chronological age is just a number. Your biological age can tell you how healthy you really are.
Up Next
Health

Why You Should ‘Rewild’ Your Diet to Help Your Microbiome

The community of microorganisms that live inside of your stomach is one of the most important markers of health, physically and psychologically.