One of the possible roadblocks to discovering extraterrestrial life is that it may be so different we might not recognize it. As recently retired astronaut and biochemist Peggy Whitson put it, “it’s not necessarily going to look the same as us, or be based on the same principles.” We’re so used to the lifeforms on Earth—mind-bogglingly varied as they may be—that it’s difficult for us to imagine beings completely out of our frame of reference, more specifically beyond our senses. Beings made of light or mist, or some kind of matter we can’t see; there’s no end to the possibilities. As we hunt for other life, our limited imaginations amount to an unavoidable form of prejudice that could doom the search. Mindful of this, and to help us practice being more open-minded, experimental philosopher Jonathon Keats is about to reveal, in San Francisco, music for aliens who don’t hear. At least as we do. He calls it Omniphonics. He’s even composed a “Universal Anthem” for us to play together with our new acquaintances. 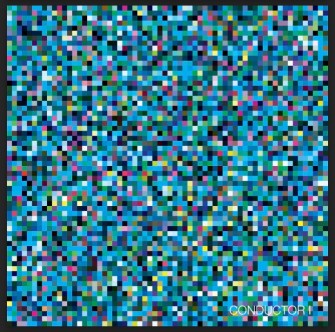 The Universal Anthem was first performed at the University of North Carolina Asheville in April 2018 by the Copernican Orchestra. Instrumentation included a light harp, “gamma-ray bells,” and a “gravitational cello.”

The movement within the piece follows the Second Law of Thermodynamics, albeit backward since, as Keats says, that’s what human life does: “We become highly ordered forms of matter, and then we decompose.” Critical to its performance is the presence of instruments that produce “sound” using electromagnetic and gravitational waves.

These waves, which we don’t perceive, are key to Keats’ premise. A sound to a human is a representation produced by our ear anatomy in concert (ahem) with our brain as a response to the receiving of cyclic changes in air pressure in a range from about 20 Hz to just over 20 kHz. Lacking the same anatomy, the air pressure fluctuations would pass by meaninglessly.

So what about developing instruments that go beyond that frequency range, or that excite other media, such as the electromagnetic field or gravity? Maybe there are extraterrestrial lifeforms who can “hear” the cyclic fluctuations of such instruments.

Keats has built some instruments for aliens wishing to jam on the Universal Anthem. Do they really do what they purport to do? Who knows? Also, who cares? It’s mostly a thought experiment. 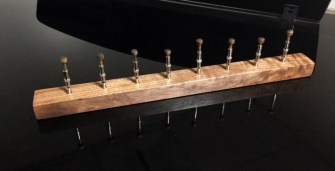 Here’s Keats’ description of how this instrument plays ultrasonic, or super-high, frequencies above our hearing range.

These higher pitches can be played on the ultrasonic organ, which employs dog whistles in place of conventional organ pipes. Air is pumped by bellows into the hollow of a wooden wind chest, where pressure is channeled to blow as many as eight whistles at once. The pitch of each whistle is controlled by a wooden valve, which can also mute the whistle’s sound. Additional control is achieved by varying the airflow, which is modulated by the rate at which the player’s feet compress the bellows. 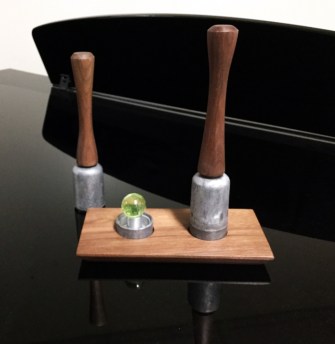 If the ultrasonic organ goes to 11, as Nigel Tufnel of Spinal Tap might claim, this goes to 20: Way, way up there. Here’s Keats’ explanation, which sounds like its player should wear lead protective garb. (Also, anyone know how to put umlauts above an “n?”)

Reaching frequencies greater than 10 exahertz, gamma rays fall outside the normal human sensory range. However this type of electromagnetic radiation is notable for high photon energy and strong penetration of matter, qualities that might ring loud and clear for beings evolved in extraterrestrial conditions. These two bells emit gamma rays at different frequencies based on the atomic structure of their core radioisotopes. One bell utilizes uranium, in the form of a uranium-glass marble. The other uses radium, in the form of a radium watch dial. In both cases, the radioisotope is completely covered by the lead bell casing, blocking all gamma radiation unless the wooden handle is lifted. The performer may manually raise each bell casing as little or as much as desired, modulating the music the bells make by gamma ray exposure. 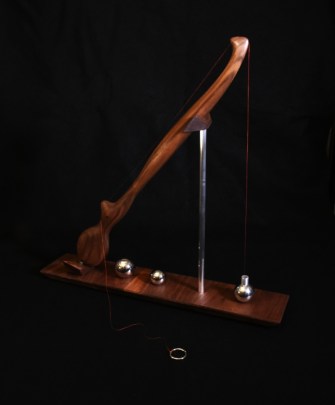 Keats notes, “First observed by physicists in 2015, gravitational waves are unique because they ripple through spacetime itself. Their oscillations are subtle.” Still, huge and elusive as they are “gravitational waves have qualities beneficial to musical expression, including lightspeed transmission and minimal distortion even as they travel across the cosmos.” Keats says he developed the gravitation cello to spare musicians “the inconvenience of orchestrating astronomical events.” Here’s how it’s purported to work.

The performer plays the instrument by swaying the steel ball at the end of the string, controlling its motion by movement of the wooden shaft and alteration of the string’s length. Waves are emitted as the ball swings. Frequency is increased by greater acceleration of the spherical mass. The instrument includes multiple interchangeable balls to maximize versatility. Attaching a more massive sphere increases the amplitude. Note: The player is advised to move as little as possible during performance, as bodily acceleration will emit gravitational waves that may distract from the gravitational music.

Sound, being just one human sense, is just the beginning of this conversation. Who knows how many senses extraterrestrials could have, or how much they’d overlap with ours? The key takeaway here is that we have to continue to practice imagining life beyond our own familiar sensory experiences if we hope to find it, which some of us, not all of us, do.

Related
Hard Science
Some earthquakes last for seconds, others for minutes — and a few for decades
What do you call it when the Earth shakes for three decades?
Sponsored
What childhood “money story” is shaping your financial behaviors?
Here are the signs that you inherited “money anxiety” from your parents.
The Present
The “maritime Indiana Jones” who salvages shipwrecks now wants to tow icebergs
Simple physics makes hauling vast ice chunks thousands of miles fiendishly difficult — but not impossible.
Neuropsych
Inside the brains of aging dogs
In a citizen science project, thousands of pet dogs are helping scientists to understand what happens to memory and cognition in old age.
Neuropsych
The most common source of awe might surprise you
It’s us.
Up Next
Politics & Current Affairs
4 landmark decisions from Supreme Court Justice Anthony Kennedy, who retires in July
Supreme Court Associate Justice Anthony M. Kennedy, 81, announced on Wednesday his upcoming resignation, marking the end of a three-decade tenure on the high court.