Star Trek fans remember the medical tricorder every time they undergo an invasive diagnostic. ”Why isn’t such a device available today?” they wonder. Rest assured my Trekkie friends. Handheld devices are nearly here. Researchers at Harvard Medical School are developing a diagnostic similar to those used by diabetics who can prick their finger and with a small device, get a reading on their blood sugar level. This new, totally noninvasive method will work much like a handheld MRI. Instead of forming a picture using magnetic resonance and sound waves, this device will take blood samples and tests for various molecules associated with a bacterial infection or even cancer . Researchers say it is 800 times more sensitive than a full size MRI.

Meanwhile, wearable tech is also coming online. Ever been somewhere and find that you have nowhere to charge your laptop, tablet, or smart phone ? This problem will soon be a thing of a past, thanks to Australia’s National Science Agency, particularly one division: the Commonwealth Scientific and Industrial Research Organization (CSIRO). Researchers there have developed a Flexible Integrated Energy Device (FIED), also known as a power jacket. This is a vest that can be easily put inside a jacket or coat. Included within are shoulder pads that generate electricity through the wearer’s movement, which can be used to charge your phone, MP3 player, whatever. Now such concepts are being imbued with a medical aspect. Case in point, the world’s first undergarment that can detect breast cancer. 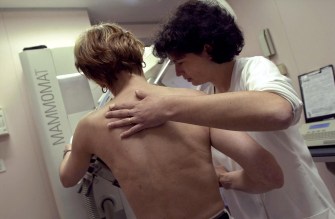 A mammogram is the best diagnostic for early detection currently.

The BSE Bra, brought to you by First Early Warning Systems, uses a technique known as thermography. A microwave antenna inside the garment picks up any changes in heat signature within the breast. An increase in heat may mean changes in the growth of blood vessels, which could indicate the presence of cancer . A tumor usually commandeers its own blood supply in order to grow and metastasize or spread. The bra employs passive microwaves, which are also used to pin down star locations and locate submarines. There is no health danger from exposure to these waves. On the contrary, the bra can help detect breast cancer early, allowing the patient much better treatment options and outcomes. Still, it may not be a perfect system. One concern is that non-malignant growths may give off a similar heat signature to cancerous ones.

The world’s first “smart bra” is the brainchild of Professor Elias Siores . He is the director of the Centre for Research and Innovation at the University of Bolton in the UK. Dr. Siores waves away the fear of false positives. He believes the BSE Bra can actually help prevent them. Within the bra is a sensor connected to software that utilizes AI, chronology, and pattern recognition to indicate whether or not changes in the breast might be due to the presence of a tumor, or something else. The bra can not only detect but determine the prognosis and how far along the cancer has developed. 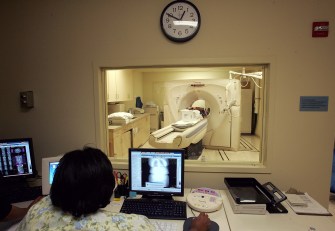 An MRI being used to detect cancer.

Will guys soon see a similar advancement, underwear that can detect prostate cancer? Though somewhat humorous, this would be a much needed development. Current diagnostics give a lot of false positives, leading to unnecessary biopsies which are invasive and can cause side effects. Prostate cancer is the second most deadly among men past melanoma, and much like breast cancer, doesn’t often show symptoms until it’s too late. So far, no announcement for cancer detecting underwear for men has been reported.

Other new methods of cancer detection, outside of wearable ones, are also on the horizon. Philadelphia-based UE Lifesciences is working on a handheld device much like a tricorder to detect breast cancer. It hopes this new diagnostic will someday replace the mammogram. Delphinus Medical Technologies is working on a process that uses ultrasonic technology to scan for and identify the presence of breast tumors. Lastly, Ascent Diagnostics is working on a test that can evaluate the levels of certain proteins in tears as a method of early cancer detection. Whether or not one of these methods will find their way into a garment or some other wearable tech in the near future is anyone’s guess.

To learn more about the BSE “Smart” Bra click here:

These hard-to-finish books are still worth the effort.
Up Next
Personal Growth

From Cultural Appropriation to Appreciation, What Do Tacos have to Do with It?

What do Rachel Dolezal and the ethnic foodie scene have in common?