According to the established timeline, hominids didn’t leave Africa until 1.75 million years ago. Homo ergaster (“working man”) was thought to be the first to make it to Southern Eurasia. It used primitive stone tools, which is where it got its name. Some scientists believe this is actually a subspecies of Homo erectus (“upright man”) who lived about 1.89 million to 143,000 years ago. A new discovery in Greece however is challenging our current understanding and may sow controversy within the paleontological community.

While on vacation in 2002, paleontologist Gerard Gierlinski of the Polish Geological Institute noticed something strange. He was in an area called Trachilos on the western side of the Isle of Crete, when he came across some fossilized footprints which he thought looked awfully human-like. Since then, they’ve been studied extensively and dated. The footprints appear to be approx. 5.7 million years old, far older than the species thought to be the first to appear with human-like feet.

Meanwhile, our ancestors didn’t come on the scene, so we thought, before 4.4 million years ago. This was Ardipithecus ramidus or “Ardi,” first discovered in the early 1990s in Ethiopia. Though it walked upright on land at times, it still had the type of big toe which allowed it to grasp branches, and so it must have also walked on all fours in the trees.

The oldest known human-like footprints previously were the Laetoli footprints of Tanzania. They’re 3.6 million years old and are thought to have been made by Australopithecus. This is the first evidence to show upright locomotion and human-like feet. Australopithecus is considered the intermediate between apes and us. 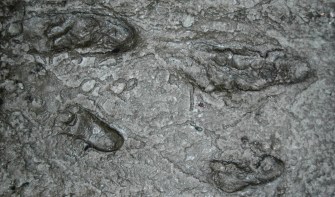 In 2010, Gierlinski returned with a colleague, Polish paleontologist Grzegorz Niedzwiedzki, from Uppsala University in Sweden. They studied the impressions extensively. No ape could have made them. According to the Uppsala University press release, “Human feet have a very distinctive shape, different from all other land animals. The feet of our closest relatives, the great apes, look more like a human hand with a thumb-like [big toe] that sticks out to the side.”

Features that make our foot unique include a big sole, five forward-pointing toes with no claws, and a distinct hallux or big toe. These prints fit all of those features. The oldest, most complete hominid found to date is 4.4 million year-old Ardipithecus ramidus from Ethiopia. It had ape like feet. Remember, these prints are 5.7 million years old.

Australopithecus had a similar foot to ours. The only difference is the heel was smaller and it didn’t have a fully formed arch. This species lived in Eastern Africa from 3.85 to 2.95 million years ago, and so was far younger than whoever (or whatever) made the footprints on Crete. Of the two, scientists believe the Laetoli track-makers look a little more advanced than the Cretan. 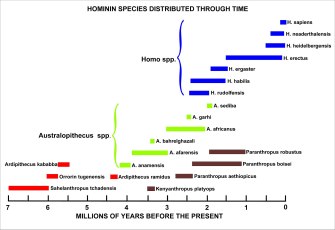 The currently established timeline. By: Cruithne9 (Own work) via Wikimedia Commons.

Crete lies north of North Africa and south of the Greek peninsula. The prints were made during the Miocene geological period, at the time when the Messinian salinity crisis was in full swing. This was when the Mediterranean dried up, which took place between 5.96 and 5.33 million years ago. Crete was still attached to the Greek peninsula at the time via a land bridge. So whoever or whatever made these footprints must have followed game there from Europe. The land bridge disappeared five million years ago.

If they migrated out of Africa, they could have easily traveled across the Mediterranean, into the Levant (Israel, Lebanon, and Syria), Turkey, and even throughout the Southern Balkans, according to these scientists. The Sahara desert didn’t exist at the time. All of Northern Africa and the Eastern Mediterranean was savannah.

Another option is that some type of ancient hominid, or even a great ape we’re unaware of, developed human-like feet independently at that time. Scientists say the migration model is more likely. The findings of the international team who analyzed the footprints were published last August in the Proceedings of the Geologists’ Association. 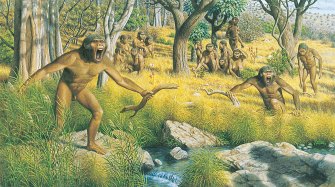 Could this be from an older hominid species we’ve never discovered before? By: Matheusvieeira via Wikimedia Commons.

These fossil footprints were dated using foraminifera (marine microfossils) from over and underlying beds in the sedimentary rock. The prints were in a very distinct layer, dating back 5.6 million years, when the Mediterranean Sea dried out, an event which geologically can be clearly distinguished.

This isn’t the only such discovery causing upheaval. Another team earlier this year found a piece of jawbone and some teeth from an unknown hominin species, currently being called Graecopithecus, as it was discovered in an area between the Balkans and Greece. These fossils were dated at 7.2 million years old.

Per Ahlberg at Uppsala University was the lead author in the footprint study. “What makes this controversial is the age and location of the prints,” he said. “This discovery challenges the established narrative of early human evolution head-on and is likely to generate a lot of debate.” Whether or not these findings will be accepted in the paleontological community remains “unseen,” he said.

To see another such discovery which is changing what we know about human evolution, click here:

If you’re trying to hide how you feel about something, be careful with your hands.
Up Next
Surprising Science

Scholars May Have Reconstructed the Face of a Controversial Biblical Figure

The same technique is used by crime scene investigators in the FBI.