Lasers have been a mainstay of sci-fi battles for decades. But making them practical for the battlefield has proven difficult. Now, private contractors and government agencies have developed weapons systems that are making science fiction a reality. This was made evident when Lockheed Martin and the US Army recently announced, a successful test of a 60-kilowatt (kW) laser. This one was twice as powerful as one they assessed in 2015.

The basic design was first introduced via the Department of Defense’s (DoD) Robust Electric Laser Initiative Program, launched in 2010. Most laser weapons would require a large power supply. In this way, they’re stuck being mounted at a permanent base, which isn’t so useful. Over time, laser technology has grown small enough, yet powerful enough to serve military purposes. They have incredible advantages, including not having to store or deploy expensive ordinance, and a near unlimited firing capacity.

This isn’t the first foray into military-focused lasers. Lockheed’s ATHENA 30-kW fiber laser, in 2015, was shown to destroy a truck one mile away, burning through its manifold in just a few seconds. This replicated a Pentagon test from 2009. The image Lockheed used when it made its announcement portrayed the laser mounted on one of the Army’s Heavy Expanded Mobility Tactical Trucks (HEMTT). This is an armored truck meant to haul heavy artillery.

The weapon itself is a combined fiber laser, which means it doesn’t actually fire one but two lasers condensed into one beam, making it stronger. It uses fiber optics bundled together where each contributes energy to the beam, making the process scalable. The particular laser tested however was “diffraction-limited,” meaning it was close to the place where the beam could no longer be concentrated on a fixed point. 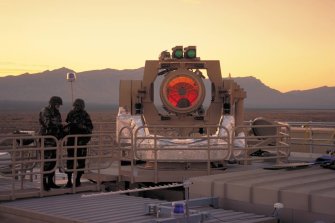 Most military lasers today are too big and need too much power. New designs are blowing these models away. Getty Images.

The beam is actually invisible and as with most lasers, silent. Not only that, it’s proved extremely accurate and efficient. 43% of the overall power goes to the laser, allowing the rest to go to the truck. Robert Afzal is a senior fellow for laser and sensor systems at Lockheed Martin. He told The Washington Post, “We’re really at the dawn of an era of the utility of laser weapons.”

The system will soon be delivered to the Space and Missile Defense Command/Army Forces Strategic Command (USASMDC/ARSTRAT), in Huntsville, Alabama, where it will undergo further testing. Initially, the system reached 58 kW, a record. But Lockheed officials assured it will produce a 60 kW beam by the time it’s ready, sometime in the next few months.

SMDC spokesman John Cummings said, “Our ultimate goal is to have a 100kW laser on a vehicle.” He added, “We have to take baby steps to get there.” Besides trucks, such lasers could be mounted on planes, helicopters, and ships.

These days, security and military officials fear a swarm of weaponized drones. This laser may be the perfect way to neutralize them. A recent incident made headlines when a $3 million Patriot missile, as part of a missile defense system, shot down a drone worth a few hundred dollars. Such a laser, costing maybe a dollar a shot or less, would offer a precise, versatile, and cost-effective alternative. Not only can it take out a swarm of deadly drones, it can act as a missile defense system, and even protect against an overwhelming number of mortars, rockets, or artillery shells. 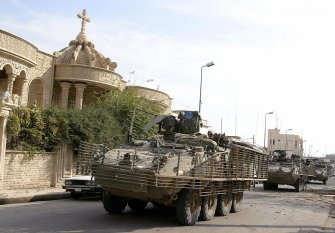 This isn’t the only laser weapon in the DoD’s sights, far from it. At the end of February, beginning of March, USASMDC/ARSTRAT tested a 5-kW laser, mounted on a Stryker assault vehicle, at the White Sands Missile Range in New Mexico. The Stryker was equipped with a Mobile Expeditionary High Energy Laser (MEHEL) 2.0., allowing it obliterate militarized drones.

It was tested for five days. The laser effectively took out 20 lb. quadcopter drones, in groups and singularly, each moving at about 115 mph (185 km/h), and at an altitude of 1,200 ft. (366 m). SMDC’s Adam Aberle, who worked on this project said, “We were able to verify and show that we could put a radar and a laser on a platform so it could self-cue to targets and that was very successful.” The Army previously announced that it plans to begin deploying laser weapons in 2023.

The US Navy’s USS Ponce already carries a formidable laser. This can take out light aircraft, drones, and even small boats. It does so by heating elements, causing ordinance to explode, or by blinding sensors. The Navy is also planning on imbuing helicopters with lasers to protect against shoulder fired anti-aircraft missiles. 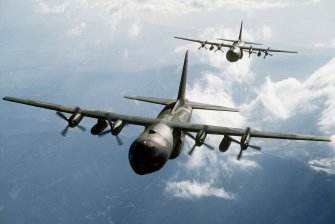 The US Air Force Research Laboratory (AFRL) has an offensive laser, which it’s fitting onto a C-130 Hercules military transport aircraft, according to Dr. David Walker. He works in the Office of the Assistant Secretary of the Air Force for Acquisition. General Atomics is the defense firm developing the weapon, rumored to be called the: High-Energy Liquid Laser Area Defense System (HELLADS). The Air Force plans to have lasers on fighter planes by 2020.

So far, it’s been tested at the White Sands Missile Range, and was said to show, “unprecedented power.” According to DARPA, “The goal of the HELLADS program is to develop a 150 (kW) laser weapon system that is ten times smaller and lighter than current lasers of similar power, enabling integration onto tactical aircraft to defend against and defeat ground threats.”

The air force is also working on a defensive shield, encapsulating and protecting fighter planes, much like in Star Wars or Star Trek. The difficulty is creating a laser bubble which would take out missiles, drones, and other aircraft, without interfering with the airplane’s own aerodynamics. The project has so far successfully tested a turret which could provide such shielding. It isn’t just the US developing these. Other countries are showcasing their own laser weapons, including The UK’s Dragonfire Programme and China’s Silent Hunter. Each can take out drones, light aircraft, missiles, cars, and projectiles such as artillery shells.

Scientists ranked countries on their end-of-life care. The U.S. fared poorly.
Up Next
The Present

When Paris Doesn’t Meet Expectations, Some Seek Hospitalization for Syndrome

Paris, France is just too real for some tourists to handle. This results in Japanese tourists getting sick, and seeking therapy because of unmet expectations.