A new scientific study has just been published that illustrates a phenomenon known as the solar “grand minimum.”

Also, known as the “prolonged sunspot minimum,” it’s a period when the Sun’s magnetic pull will diminish, sunspots will be much less frequent, and less ultraviolet radiation will make it to planet Earth — all due to random fluctuations in the Sun’s magnetic field. All of that can mean unusually cool temperatures for us, and it’ll also make the Sun appear dimmer.

The Sun is on an 11-year up/down cycle as it is, but this grand minimum will be especially cold, as the Sun’s activity will go lower than the regular 11-year low. That translates to colder temperatures for parts of the world. 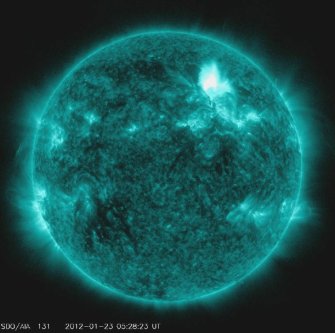 How cold? Predictions, based on a study of previous sunspot reductions preceding a grand minimum period, are that we’ll see a 7% reduction in the Sun’s light and heat — and remember, that’s 7% lower than the lowest of the 11 year cycle that we usually see.

Such a grand minimum happened in the middle of the 17th century. Known as the “Maunder Minimum” (from the names of 2 well respected solar astronomers of the time, Anne Russel Maunder and Edward Walter Maunder), the resultant cold temperatures saw the river Thames freeze, and the Baltic Sea as well — which allowed a Swedish army to invade Denmark by marching across the ice.

At the same time, Alaska and Southern Greenland warmed, due to the thinning of the Earth’s stratospheric ozone layer, which changes wind and weather patterns around the world.

The exact date and severity of the event is still in question, but the clues all point to things bottoming out around the year 2050. It could start as soon as 2030, however. Just for reference, the Maunder Minimum lasted from 1645 until about 1715.

Will it save us from global warming? The very same scientists don’t think so.

“The cooling effect of a grand minimum is only a fraction of the warming effect caused by the increasing concentration of carbon dioxide in the atmosphere,” according to the study.

I have my own prediction: If I’m still alive by then, I’ll be heading to Jamaica.

Related
Starts With A Bang
Ask Ethan: What are white holes, and do they really exist?
In General Relativity, white holes are just as mathematically plausible as black holes. Black holes are real; what about white holes?
Life
Strange life forms create an “alien” ecosystem in an abandoned uranium mine
Slimy biofilms made up of bacterial and eukaryotic life forms have taken over an abandoned, flooded uranium mine in Germany.
Hard Science
Earth has an eerie “sodium glow,” and astronomers use it to image stars
Air currents in our atmosphere limit the resolving power of giant telescopes, but computers and artificial stars can sharpen the blur.
Health
How saliva changes the flavor of food
“It’s a liquid, but it’s not just a liquid.”
High Culture
Why are flood myths so common in stories from ancient cultures around the world?
Could the prevalence of flood myths around the world tell us something about early human migration or even the way our brains work?
Up Next
Personal Growth
The meaning of life according to Nietzsche
Having trouble finding the meaning of life? Nietzsche had the same problem. His philosophy offers us a few suggestions for finding the solution.