Unicorns and humans may have once walked the Earth, together. A new study from the American Journal of Applied Science explains why scientists believe this “Siberian unicorn” may have roamed the Earth longer than previously thought.

Prior to this study, scientists believed Elasmotherium sibiricum went extinct 350,000 years ago. But radiocarbon dating from a skull discovered in the Pavlodar Priirtysh Region of Kazakhstan provides new evidence that this creature may have endured, dying closer to 29,000 years ago. 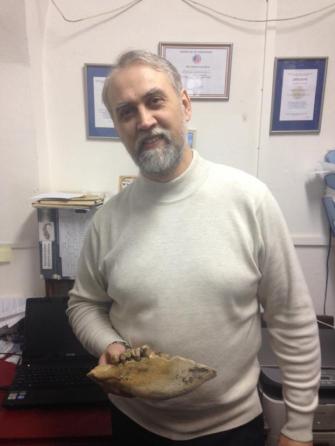 “Most likely, in the south of Western Siberia it was a refúgium [refuge], where this rhino had preserved the longest in comparison with the rest of its range,” said Andrey Shpanski, a paleontologist at Tomsk State University.

The description “Siberian unicorn” might be a bit misleading, as its “look” in no way resembles the white unicorns of fantasy and myth. The Elasmotherium sibiricum actually looks quite intimidating; it stood 6 feet tall and 15 feet long, and weighed four tons. It had a shaggy coat and a long horn that protruded from its face, so you could say it looked more like a fuzzy rhinoceros than a graceful unicorn.

Fossilized skull reveals that a Siberian “unicorn” roamed the Earth 29,000 years ago: https://t.co/a2hXW2NmG3pic.twitter.com/gdZcJqC05w

The cause of death of this last known “Siberian unicorn” is uncertain. What they do know is the Elasmotherium sibiricum was an older male. Because of this new evidence, researchers may be closer to figuring out the environmental factors that may have played a role in this animal's death and the extinction of its species.

"Our research makes adjustments in the understanding of the environmental conditions in the geologic time in general. Understanding of the past allows us to make more accurate predictions about natural processes in the near future: it also concerns climate change,” Shpanski summed up in a statement.

Expressing gratitude encourages others to continue being generous, promoting a cycle of goodness.
Up Next
Strange Maps

How Do You Say ‘Plastic Bag’ in French?

Depending on where you do your shopping, it could be a sac, a pochon or even a nylon.