July 2015 was the warmest record in human history, that is since the NOAA began recording data in 1880. Just look at this image from the National Oceanic and Atmospheric Administration’s land and ocean percentiles. 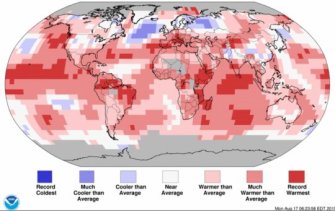 The trend threatens to unbalance the way life on Earth. Warming has caused Alaskans to reconsider its famous sled dog races and cut the hibernation time of the Yellowstone grizzly bears short.

Now another alarming sign has arrived: California is sinking into the Earth.

NASA has just released a report showing the San Joaquin Valley in California is sinking faster than ever before and scientists say climate change is to blame.

NASA images show that the valley is sinking close to two inches each month in some locations. Land in the Tulare basin sank 13 inches in a matter of eight months and a piece of the Sacramento Valley is going at a nice clip and sinking 1.5 inches each month.

Scientists believe the cause of this downward shift in the Earth’s surface, known as subsidence, is caused by groundwater extraction in the region as a result of the drought.

In other parts of the country, the weather has had its ebbs and flows, but what people need to concentrate on is the average — what are the bigger trends we’re seeing. I think Neil deGrasse Tyson may have explained it best in his video for National Geographic.

“Because of increased pumping, groundwater levels are reaching record lows — up to 100 feet (30 meters) lower than previous records,” said California Department of Water Resources Director Mark Cowin in a press release. “As extensive groundwater pumping continues, the land is sinking more rapidly and this puts nearby infrastructure at greater risk of costly damage.”

Cowin added that “Groundwater acts as a savings account to provide supplies during drought, but the NASA report shows the consequences of excessive withdrawals as we head into the fifth year of historic drought.”

Even when rain does come to the state, scientists worry dried-out aquifers may not be able to hold the same amount of water as they once did.

Are physicists about to decode a mysterious field of science that could have huge implications for your health?
▸
with
Jim Al-Khalili
Up Next
Starts With A Bang