It’s been an interesting summer for animal-welfare issues. Cecil the lion’s murder by an American hunter who paid local trackers to lure the popular animal out of the protection of a Zimbabwe national park so he could be killed and beheaded as a trophy fueled international outrage. So did the killing of Blaze the grizzly bear in Yellowstone Park after the mother and her cubs were surprised by an off-trail hiker, who Blaze instinctively attacked and then ate. (Actually, like a good mom, she buried part of the hiker’s remains so her family would have food later.)

Prompting far less attention, but way more important to the evolving issue of how humans should treat non-humans, was the publication of Beyond Words, What Animals Think and Feel, by Carl Safina, a thoughtful, moving, and important book about animal cognition and emotion. Safina writes with respect, affection, admiration, even awe about the remarkable cognitive abilities of many animals, and argues that we should treat non-human creatures with more respect. But he is a scientist, and he bases his case not on emotion alone, but on the firm and ever-mounting body of evidence that non-human beings, with whom we have far more in common biologically and behaviorally than what separates us, are significantly more sentient, intelligent, and rational than we give them credit for.

Safina focuses on elephants, wolves, dolphins, and killer whales, but his examples range from apes to fish to birds to insects. The stories Safina tells are remarkable. They provide powerful evidence of animal intelligence, learning, and self-awareness (defined not by whether the animal can recognize itself in a mirror — Safina ridicules this as too narrow a measure of self-awareness — but whether the animal is aware of itself as a unique being separate from others).

There is stunning and ample evidence — at least among the social animals — of what only can be described in human emotional terms; the family warmth and affection among elephants, the mourning of killer whales at the loss of a child (descriptions of the wailing and frenzy of parent killer whales when their juveniles are abducted for display in marine amusement parks are heartbreaking), or the excitement and happiness dolphins demonstrate when re-uniting with human researchers they see only occasionally.

And there are numerous instances of animals displaying what, in human terms, we’d describe as personality; individual animals within each species that are more playful, aggressive, docile, or curious — or animals with better or worse skills as family leaders.

In case after case non-human animals consistently demonstrate the ability to intelligently figure things out, to make the right choices, to actively interpret all sorts of cues — sounds, smells, gestures — in order to find food, identify mates, ensure safety, and interact successfully with their environments.

All sorts of animals have social skills. Many demonstrate what can only be described as emotions. They think. They feel. Safina argues that we have to stop thinking about animals by asking, “What are you?” and start also considering, “Who are you?” 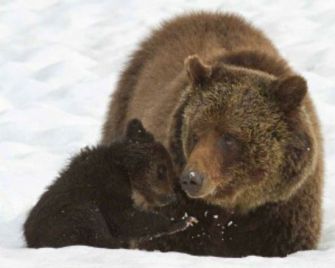 Buried inside Safina’s moving and evidence-based argument that non-human animals are worthy of respect and moral treatment is an even more profound message. If rationality is defined as basing one’s judgments and behaviors on an objective analysis of the evidence, our non-human partners on the Tree of Life have it all over us. Safina writes:

“There is in nature an overriding sanity and often, in humankind, an undermining insanity. We among all animals are most frequently irrational, distortional, delusional, worried.

We are the only species known to deny overwhelming evidence — about vaccines, about climate change, about the dangers of smoking — in ways that actually put us in greater danger. The emotional nature of human risk perception can sometimes produce a literally self-destructive irrationality. Non-human animals don’t make such mistakes.

With our unique ability to foresee the future, we are the only species known to invent phantom beliefs, complete with detailed rules of behavior and morality, to give ourselves the illusion of control over our uncertain fates. Non-human animals don’t have religions. They don’t need them. As Safina observes:

“Other animals are great and consummate realists. Only humans cling unshakably to dogmas and ideologies that enjoy complete freedom from evidence, despite all the evidence to the contrary.”

And as Safina notes, it is patently irrational for humans to deny the voluminous evidence that animals think and feel. Is that just anthropomorphic arrogance? Or is it necessary to absolve ourselves for the callousness (and outright cruelty) with which we treat non-humans? He asks:

“Why do human egos seem so threatened by the thought that other animals think and feel. Is it because acknowledging the mind of another makes it harder to abuse them?”

Or, as Safina quotes Charles Darwin:

“Animals, whom we have made our slaves, we do not like to consider our equal.”

Beyond Words joins Virginia Morell’s Animal Wise: The Thoughts and Emotions of Our Fellow Creatures and other writing on animal cognition as the equivalent for non-humans to Daniel Kahneman’s Thinking, Fast and Slow and Daniel Ariely’s Predictably Irrational and lots of other literature on human cognition; works that pull together remarkable recent discoveries about how living beings think. These popular works are bringing into focus, and wider awareness, what research has discovered in the past 30-40 years; that non-human animals are more sentient, intelligent, and rational than we have assumed, and that humans are far less rational than we have pretended.

Now if only we can use this knowledge, about human and non-human intelligence, more intelligently.

Related
Starts With A Bang
The Universe’s most unbreakable symmetry
The combination of charge conjugation, parity, and time-reversal symmetry is known as CPT. And it must never be broken. Ever.
13.8
The weirdness of quantum mechanics forces scientists to confront philosophy
Though quantum mechanics is an incredibly successful theory, nobody knows what it means. Scientists now must confront its philosophical implications.
Neuropsych
Why is a Starbucks loyalty rewards program making customers so angry?
The rewards price to get a free cup of hot coffee at Starbucks is going up.
Empowering growth
7 essential management training topics for every team leader
From emotional intelligence to problem solving, these management training topics will set team leaders up for success.
Thinking
What if you could rewire your brain to conquer suffering? Buddhism says you can
For Buddhists, the “Four Noble Truths” offer a path to lasting happiness.
Up Next
Starts With A Bang
Weekend Diversion: The Horror And Beauty of California’s Wildfires
The pictures of Stuart Palley tell a story that no words can.“the way to create art is to burn and destroyordinary concepts and to substitute themwith new truths that run […]