For this week’s Big Thinkers on Mental Health video, we have Columbia University Professor of Clinical Psychiatry Dr. Michael Stone dishing on mental illness as it pertains to violent crime. Dr. Stone, who is also a licensed forensic psychiatrist, makes the point that much of what you probably know about the link between the two stems from what you’ve read in the papers or seen on the news. After all, nothing sells a Sunday edition quite like “CrazyPersonKillsPeople.”

In the video below, Stone argues that this constant barrage of negative news coverage unfairly paints the vast majority of people suffering from mental illness as potential dangers to the public. Truth is, they’re not:

As any responsible analyst would do, Stone runs a statistical analysis. Are those diagnosed with schizophrenia more likely to commit violent crimes? Yes, though that’s not entirely surprising. Is violent crime among the mentally ill a serious problem? Again, yes. No one wants to downplay that. What’s notable though, especially compared to how the media has painted the topic, is just how many people suffering from serious mental illness do not commit violent crimes. As is often the case, a minuscule minority is painting perceptions of the vast majority. 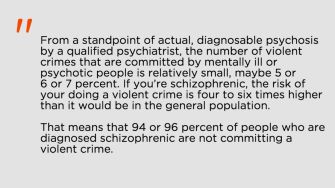 Also of note: the 4-6% of diagnosed schizophrenics who do commit violent crimes are not a random swath of the population. Their bad behavior is more often than not influenced by other variables such as alcohol abuse, which causes the risk of violent crime to skyrocket. Given this information, the typical schizophrenic who is not a substance abuser runs little risk of committing murder, rape, assault, or other similar crimes. Those who do commit violent crimes are often incarcerated in forensic hospitals which, if you’ve ever read One Flew Over the Cuckoo’s Nest, you know are much more difficult to leave than a typical prison.

Stone argues that this general stigma has stemmed from media coverage of tragic events that lacks the necessary nuance to report intelligently about mental illness. The result: fear. In this way, staying away from someone with a severe mental illness for fear of violence is not altogether unlike walking to the other side of the street to avoid walking past an African-American teenager or refusing to fly on a plane with someone wearing a hijab. It’s baseless apprehension and cognitive bias. The mentally ill deserve better than to be constantly treated as if they’re just one bad day away from violence and murder.

Being mortal makes life so much sweeter.
Up Next
Culture & Religion

Should A Civil Servant Be Civilly Disobedient?

Since being jailed last week for contempt of court, Kim Davis has emerged as a heroine for the conservative Christian Right.