They were called the Pink and White Terraces of Lake Rotomahana, and they were in the Rotorua district of New Zealand. There were two lakes nearby, called Rotomakariri (Cold Lake) and Rotomahana (Warm Lake) by the local Maori. Lake Rotomahana was home to the spectacular Travertine terraces caused by mineral deposits from nearby hot springs. The terraces were the largest of their kind anywhere, and were referred to by some as the “8th wonder of the world.” At least they were, until Mount Tarawera erupted through the center of Lake Rotomahana on June 10, 1886, and obliterated them. Or did it?

Both sets of terraces were fed by water from two geysers on a hill above Lake Rotomahana. It carried silica that crystallized over hundreds of years, forming the pair of terraces through a geologic process called “sintering.” 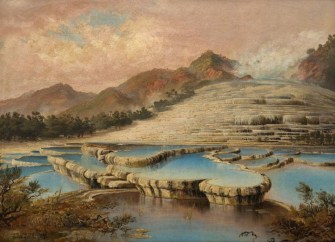 The larger of the two terraces, the White Terraces — Tarata, or “tattooed rock,” in Maori —covered about 7.41 acres, and contained some 50 steps descending about 40 meters down to the north shore of Lake Rotomahana. The White Terraces’ northern exposure was believed to account for their bleached, lighter coloration.

The Pink Terraces — Otukapuarangi, or “fountain of the clouded sky “— were about two thirds of the way down the lake, and sheltered from direct sunlight, preserving their pink color. According to Science Alert, the color was believed to be a result of the presence of pigmented bacteria along the lines of Thermus ruber, similar to micro-organisms contributing color to Yellowstone Park’s Morning Glory pool. The water collecting on the Pink Terraces was warm, as tourists in the 1800s found. 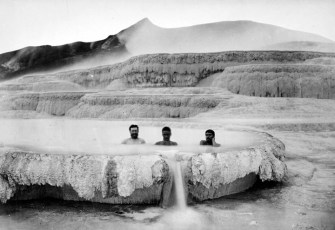 The terraces were the premier tourist attraction of New Zealand in their day, with visitors reportedly coming from across the world to see them. And it wasn’t easy to get there, either. The sea voyage to the island nation could take months, followed by a 150-kilometer journey by coach, a 15-mile hike on foot through the bush, and finally a 7-mile boat trip across Lake Tarawera to Lake Rotomahana. Locals must’ve navigated for the tourists, because the exact location of the terraces was never recorded.

When Mount Tarawera blew, it ejected tons of sediment that resulted in thick mud for miles around, killing almost 150 people from nearby villages, and forming 100-meter-deep crater that eventually filled with water to become a new Lake Rotomahana. It was much bigger than the old lake and 30 meters higher. The terraces seemed to be gone — or at least no one could find them anywhere.

Now two researchers, Rex Bunn and Sascha Nolden, have published research that suggests the terraces are still there beside the new lake, but hidden under 10-15 meters of ash.

Their confidence is based on the discovery of a 19th-century diary belonging to geologist Ferdinand von Hochstetter. His field notes, from 1859, detail a compass survey he conducted of the area around old Lake Rotomahana. And he had clearly marked the location of the terraces, finally nailing down where they should still be.

But not really. The Tarawere eruption mangled the landscape so badly that everything’s been moved around, rendering straightforward navigation from von Hochstetter’s coordinates impossible. Instead, Bunn and Nolden have been developing a conversion algorithm to make sense of things. Bunn told Stuff.co.nz, “We would have put in 2,500 hours of research in the last 12 months.” But, now, “We’re confident, to the best of our ability, we have identified the terrace locations. We’re closer than anyone has ever been in the last 130 years.”

In 2011, divers thought they had found a portion of the pink steps underwater, only to conclude eventually that they were wrong.

As far as Bunn and Nolden go, though, they’ve received permission from the Iwi people who own the land by the lake. They hope to being digging soon.

This is a perversion of justice.
Up Next
Personal Growth

There’s a link between American marijuana use and violent crime south of the U.S. and Mexico border… and even a link with avocados.