What’s the environment like inside a proton? Even the most science-minded are unlikely to have considered such a prospect. A team of physicists recently measured the pressure that can be found there and the results are astounding.

“The particle’s center withstands a billion-billion-billion times the pressure found at the bottom of the Mariana Trench,” according to New Scientist. Researchers at the Thomas Jefferson National Accelerator Facility, in Virginia, made this discovery. Physicist Volker Burkert was a co-author. He told Science News, “It’s really the highest pressure we have ever seen.” He and his colleagues’ findings were published in the journal Nature.

You might remember that the proton is positively charged, and one of the fundamental particles in the quantum world. They can be found in the nucleus of atoms and are themselves made up of tinier particles, which include quarks and gluons. Quarks are electrically charged and very social. Yet, they’re never found wandering off on their own, since gluons apply the force that keeps them together. Protons, being one of the most stable particles, help keep the universe stable, and a hospitable enough place for its contents—including us.

One of the biggest questions in quantum mechanics has been, what makes a proton so stable? Turns out, it’s a balance between two intense forces. The outward facing pressure inside a proton is approximately 10^35 pascal (Pa), 10 times stronger than the force found within a neutron star. A neutron star is a city-size celestial object, with a mass 1.4 times our sun’s. They were once massive stars that ended in supernova, then collapsed into a small, dense core. These are the densest object in the universe, and a proton’s internal force is even stronger than that! Previously, scientists surmised a proton may contain intense pressure. Yet, this is the first time it’s been proven. 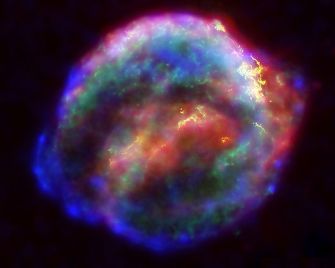 So how did they measure the pressure inside something so small? It all started with Burket and colleagues working in the CLAS: the Continuous Electron Beam Accelerator Facility Large Acceptance Spectrometer, at the Jefferson lab. This emits an energy beam (6 billion electron volts) that acts like a light particle—a photon. They fired the beam into liquid nitrogen, which is chock full of protons. Then they examined the goings on at the subatomic level. When the physicists zeroed in and shot an electron beam straight into a proton, the beam, acting like a photon, bounced off a quark, where it became absorbed.The quark released a subsequent photon, as a result.

Researchers measured the original electron, the photon it absorbed, and the one released. By assessing the collision and momentum of each particle, they were able to understand where everything was inside the proton. From there, they could make a 3D map of the quarks contained within its core. But that doesn’t tell us what forces were present there. To do that, the physicists would have to find a graviton—the particle that lends things gravity. Yet, none were discovered.

For want of a graviton, researchers studied the two photons present in the experiment. According to Burket these photons, the one initially absorbed and the other emitted after the collision, equal one graviton. One would think you could just measure the force of the gluons. But even the CLAS can’t do that. Much more energy would be needed. So a proton can’t currently be fully examined. This was a 2015 experiment, but new evaluation techniques allowed the physicists to review the data in a more comprehensive way, and tease out this approximate estimate for the internal pressure of a proton.

We seem to forget that these forces are going on inside of us all the time, too. Image credit: Finches & quarks, Wikipedia Commons.

The physicists also detected a force outside the proton, most likely caused by gluons, to counteract that which was pushing outward from the inside, allowing the particle to remain stable. Should the inward force give way, the proton would explode. Scientists say an Electron-Ion Collider, a type of particle accelerator, is in the works. It should be able to give us a better look at how gluons keep a proton together.

To learn more about the proposed Electron-Ion Collider, click here:

Here’s why mega-eruptions like the ones that covered North America in ash are the least of your worries.
Up Next
Technology & Innovation

Who invented the weekend? And when will we get a 3-day one?

Why do we work for five days and then take two days off? The answer might surprise you.