First deployed in 1990, The Hubble space telescope was the first of its kind. Unencumbered by light pollution and our planet’s atmosphere, it has in its tenure achieved an impressive list of discoveries. Among them, it’s helped us better understand dark matter and dark energy, discover proto-planets and super-massive black holes, helped us fine-tune our estimate for the age of the universe—13.75 billion years old, and much more. Despite its remarkable record, it’s getting old and is in need of retirement. So, what’s going to replace it?

An even more remarkable piece of equipment, The James Webb Space Telescope (JWST or “Webb”). This is the most sophisticated telescopes ever created. It has a 21 ft. (6.5 meter) gold-coated, primary mirror array, six times larger in area than Hubble’s. The mirror is made from 18 separate segments.

These segments are made of an ultralight substance known as beryllium. They unfold and adjust as needed and take in seven times more light than Hubble’s mirror. This is an infrared telescope, meaning it picks up infrared radiation, in addition to the visible light on the electromagnetic spectrum. This makes it so powerful, it can even see through cosmic dust. 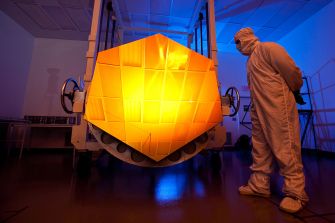 One of the gold covered segments of the mirror array. NASA.

The telescope carries other instruments including cameras and spectrometers which can detect incredibly faint signals. Another impressive feature is called the NIRSpec, which uses programmable micro-shutters that can observe up to 100 objects at once.

John Mather is an astrophysicist and the senior project scientist for Webb. He said, “We’ve done two decades of innovation and hard work, and this is the result — we’re opening up a whole new territory of astronomy.” This is such a sensitive instrument, it would be able to detect an object the size of a bumble bee, as far away as the moon is from Earth, according to Mather.

Hubble’s replacement is set to launch in October of next year from French Guiana. Webb will be nestled atop an Ariane 5 rocket, a heavy launcher primarily used by the European Space Agency (ESA). This mission has been a collaborative effort among NASA, the ESA, the Canadian Space Agency (CSA), Northrop Grumman, and the Space Telescope Science Institute. 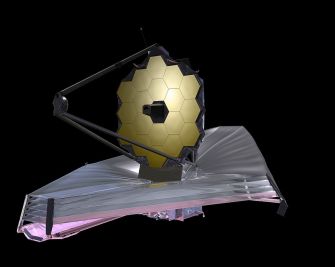 Webb was first called the “Next Generation Space Telescope” (NGST). But a push was made to name it after James E. Webb, the second administrator of NASA, who ran the agency between 1961 and 1968. He oversaw the Apollo missions to the moon and many argue that although not a trained scientist himself, he did much for the advancement of science and space exploration. In this sense, the NGST embodies the legacy of the man.

Cutting edge space-ready technology is never cheap. The price tag for Webb all told is $8.8 billion. And just like anything breaking new ground, it comes with significant risk, which is why it’s currently undergoing a battery of testing. While the Hubble was placed in low Earth orbit, the Webb is going to be positioned about a million miles (1.5 million km) away. So if something goes wrong, it’ll be difficult to get up there and fix it. Once placed, it’ll be a nail-biting six months before it’s even operational.

In its five-and-a-half to ten year mission, Webb will help us look back on the earliest moments of the universe, when galaxies were still in their infant stages. It’ll beam back data using a high-frequency radio transmitter. Since space is so big, light can only travel so far, even at its incredible velocity. We measure distant bodies therefore in light years, or how many years it takes light to travel from there to Earth. 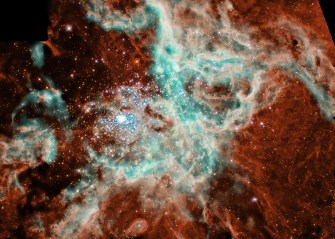 The 30 Doradus Nebula. A vast region found by Hubble where thousands of stars are born. Getty Images.

That means looking deeply into space is also looking back in time. For instance, it takes eight minutes for light from the sun to reach Earth. A better example, the nearest star system, Proxima Centauri, which is over four light-years away, appears to us on Earth as it was a little over four years ago. If a cataclysmic event occurred, we wouldn’t see it until four years later.

In this way, Webb will allow us to see how planets, stars, and galaxies were created, and how the universe has changed over time. It will also aid in the search for exoplanets, as well as give us a closer look at newly discovered ones, for signs of water, an atmosphere, vegetation, and even intelligent life, such as any visible technology or signs of pollution. Recently, we’ve discovered thousands of exoplanets, including many small, Earth-like ones. So there are lots of good candidates that could potentially harbor life.

To learn more about the Webb and how it differs from the Hubble, click here:

Expert Matthew Ball explains how the Metaverse is a golden opportunity to fix the internet.
▸
4 min
—
with
Matthew Ball
Up Next
Surprising Science

Spontaneous talk on surprise topics. Neuroscientist Dean Buonomano on how the brain tells time and whether time exists at all.