There are lots of disastrous ways climate change is affecting our planet. It is speeding up the extinction rate of many species and increasing land degradation. This could mean less fish in the sea for food and less arable land for crops, as well as many more conflicts in the world to control dwindling resources. Higher temperatures make extreme weather events more likely and far more severe. Floods, hurricanes, droughts, heat waves, and other natural disasters already come with high death tolls as it is.

Ocean levels are rising due to the melting of the polar ice caps, which is already beginning to submerge certain island nations and threaten coastal communities. Coastline is where the most populace places on earth currently reside. Rising sea levels will slowly eat away at them. Besides rising, the ocean is warming. If the Atlantic Ocean warms enough, it could put an end to the Great Conveyor Belt, a phenomenon that distributes warm water to certain parts of the world, spelling colder, harsher winters in for instance Europe and North America. 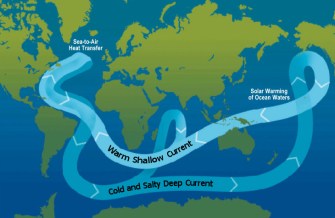 The Great Conveyor Belt may shut down due to rising sea levels, further impacting the climate.

We will also see a rise in heatwaves globally. A 2007 report found that heat waves in Europe last twice as long now as a century ago. One major heat wave there in 2003 had a death toll of 70,000. Longer and more severe heat waves could take five or even ten times that many lives. If all that wasn’t enough to make you cringe, there is ample evidence that global warming will have a more direct and significant effect on human health.

Heart disease is the number one killer in the U.S. and worldwide. According to some studies, it’s about to get worse. Heat waves cause a buildup of pollution and ozone, leading to more smog. This in turn is associated with increased rates of heart problems and hospital admissions. Higher air temperatures and more ozone can also affect how the nervous system operates. It may mean more sensitivity to toxins in the environment, including ozone.

Poorer air quality will also lead to higher incidents of asthma, and worse cases of it too. As for the heart, one study found that ozone and high temperatures led to lower heart-rate variability. This is the regular intervals between heartbeats. It stands as a metric doctors use to tell how well the heart operates. A low heart-rate variability has been linked to a greater risk of mortality after a heart attack.

If you are an allergy sufferer, climate change is bad news for you. Allergies as well as other autoimmune disorders have been on the rise in post-industrialized countries. There are lots of theories. But global warming may also be a cause or contributing factor. Some studies show that rising temperatures and carbon dioxide levels could be involved. For those who are allergic to pollen, you may consider staying inside for the rest of your life. Plants and trees are flowering earlier and total pollen counts are increasing, according to a 2005 study. Another report found that sensitivity to pollen may also be increasing. 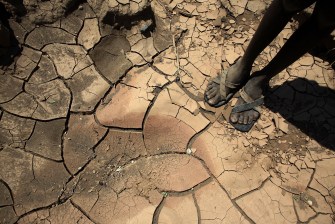 Desertification could increase rise in global conflicts, starvation, and deadly bacteria in the ocean.

Back to desertification. According to a 2010 report, 38% of the world’s arable land is located in arid areas, which could turn to desert and never productive healthy soil again. Desertification could also lead to an increase harmful water borne bacteria in the ocean. Deserts leach iron into the ocean, which many marine microbes feed upon, including harmful ones. At a recent meeting of the American Association for the Advancement of Science, researchers showed that desert dust aided the expansion of Vibrios, a bacteria found in the ocean and responsible for gastroenteritis—inflammation of the gastrointestinal tract, along with certain infectious diseases.

Researcher Erin Lipp conducted the study. She was a graduate student at the University of Georgia at the time. Lipp said that in her experiments, where desert dust from Morocco was mixed with seawater samples, led to a ten to 1,000 fold growth in the bacteria observed within a 24-hour period. These were several different types of Vibrios “…including one strain that could cause eye, ear and open wound infections, and another strain that could cause cholera,” according to Lipp. 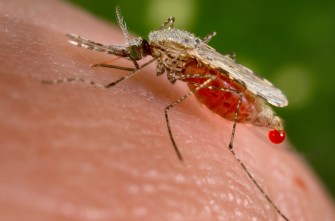 An anopheles mosquito. A known carrier of many diseases. Their numbers may soon increase.

Lastly, climate change increases rainfall. This hot, wet climate is perfect for the development and spread of infectious diseases. Insect borne illnesses do particularly well in hotter, wetter climates. Insects such as ticks and mosquitoes are cold-blooded. They cannot survive in cold temperatures. Since warmer temperatures are favorable to them, we could see a rise in global cases of malaria, West Nile virus, encephalitis, dengue fever, the Zika virus, Lyme disease, and so much more.

The number of water borne epidemics such as cholera and those from dangerous algae blooms might also increase. The CDC warns that not everyone is at equal risk. Economic resources and geographic location have a lot to do with it. Read into this that those nations of the global south, already strained, will be further compounded by these scenarios. Furthermore, the elderly, children, and those with weakened or compromised systems are most at risk.

To learn more about the pivot point we currently find ourselves at click here:

The Achilles Wheel of the Mars Curiosity Rover

The start of a tear in one of Mars Curiosity’s wheels. Image was taken more than two years ago. Image credit: NASA / JPL-Caltech / MSSS.Will Curiosity outlast Opportunity, the rover […]