The honeybee is in deep trouble. Colony collapse disorder (CCD), a condition whose cause isn’t known, has occurred in 42% of colonies within the US, since 2015. CCD occurs when worker bees mysteriously disappear, leaving a queen and her young with no one to tend to them. Invasive species, the loss of habitat, gut parasites, certain pesticides, and other causes have been considered, but nothing is definitive yet.

Research is ongoing. The Obama administration did enact some measures to help protect bee populations which so far remain in place. But they won’t be enough. Without knowing what’s causing CCD, there can be no definitive plan in place to reverse it.

That’s a serious blow to our agricultural industry and could have disastrous consequences for our food supply. 70% of food bearing plants are pollinated by bees. Harvard scientists have a technological fix in place. They’ve developed a type of micro-robot to replace these crucial pollinators, nicknamed robobees. In truth, no one really knows if they can do the job.

What’s more, who will pay for the additional service, which nature normally provides for free? Most likely, the cost will be passed along to the consumer. That means higher food prices, at a time when more and more jobs are disappearing, and wages continue to come back at a crawling pace.

To combat the loss of the honeybee population and perhaps preserve their supply chain and mascot, Cheerios has launched a campaign called #BringBacktheBees. They’ve partnered with a seed company, and have already given away 100 million wildflower seeds to interested parties in the general public. By reestablishing the bees’ vanishing habitat, they hope to bring these insects back from the brink. Though they’ve already reached their goal, they still have more seeds to give away, should you be interested — just be thoughtful about where you plant them. 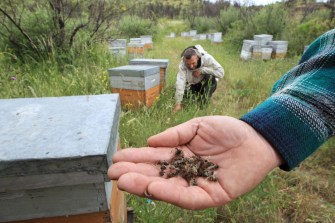 Perhaps we’d hear a far greater outcry and more would be invested, if the problem was packaged in a way that pulls at the heartstrings, rather than engages the intellect. Usually, we think of invertebrates as incapable of advanced emotions. Some of the latest experiments with bees however, are challenging this assumption.

These prodigious pollinators show a remarkably advanced understanding of patterns, can anticipate future ones, be taught behaviors, and we now have evidence that they display a range of emotions, even moods. Today, the bee crisis is packaged thusly—these service-providing drones are being snuffed out by a sterilized acronym. Instead, why not portray it as fellow, sentient beings suffering from an epidemic? This is Ebola for bees, people!

Need proof of their sentience? Consider a study out of Queen Mary University of London, which came out last year. It showed that bumblebees felt more optimistic after receiving a sweet treat. Funny thing is, people of all ages have been proven to react the same way.

Say you’ve just polished off the most decadent brownie ever devised. Here comes a new coworker you hardly know. Biologist Clint Perry was a researchers on this study. He says, after the brownie we are more likely to see the coworker as a comrade rather than a rival. Bees are also more optimistic when faced with potential threats, after a positive experience in the recent past.

In this study, Perry and fellow researchers wanted to know if bees have the same positivity bump after gobbling up a sweet treat. They took 24 bees. Half were made to enter a blue cylinder containing sugar water and the other half, a green one with plain water.

Then both cylinders were removed. Now, a third cylinder of a color somewhere between blue and green was placed inside. The bees who previously received the sugar water raced to it. Those who had plain water took their time.

Researchers likened this to how, when we have had a positive experience in the past, we judge a current situation more optimistically. Professor Lars Chittka was the senior author in this study. He said, “The finding that bees exhibit not just surprising levels of intelligence, but also emotion-like states, indicates that we should respect their needs when testing them in experiments, and do more for their conservation.” 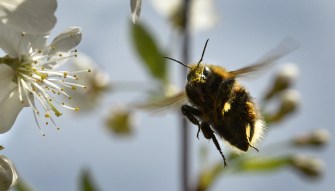 In one study, bumblebees were shown to exhibit optimism. Getty Images.

In a second experiment, researchers mimicked the behavior of a fierce predator, the crab spider. They and bumblebees often go toe-to-toe in the wild. The bees are known to slip the spider’s grasp. Here, researchers grabbed and squeezed 35 of the bees before releasing them.

Those who had entered the blue cylinder and drank the sugar water began feeding far more quickly afterward. Researchers believe their previous optimism helped them to recover from the trauma. This research has sparked off an intense debate about what emotions actually are, what consciousness is, and whether the definitions of these should change.

Now you may say, that’s all well and good for bumblebees. But what about the honeybee? Unlike their big, fuzzy brethren, these actually exhibit pessimism, according to a study out of Newcastle University in the UK. That’s huge. Only higher animals such as rats, dogs, horses, and starlings, have been found to convey this emotion. Scientists concluded that the honeybee had more in common with vertebrates that anyone thought possible.

In this experiment, a situation had to be interpreted by the subject, and could be looked upon as negative. Researchers got the bees used to a sugary smell and a bitter one. Then, some bees had their hive shaken, as if they were attacked by a predator. Next, they encountered a number of other smells.

All the bees went for the sweet smell and avoided the bitter one. When confronted with one that lay somewhere in-between, shaken bees were less likely to investigate. It was this wariness or pessimism that surprised scientists. Most researchers today believe that bees do have emotions.

The textbook definition is that emotions are our reaction to what the environment imposes on us, whether a windfall or calamity, or something in-between. Our feelings are our subjective inner-workings, how we regard our emotions, how we perceive them, and these, for all we know, are only human. However, such studies open up the possibility that bees and other higher organisms perhaps do have feelings.

As neuroscientist and philosopher Antonio Damasio of the University of Southern California, told Scientific American, “I have every reason to believe that invertebrates not only have emotions but also the possibility of feeling those emotions.”

To learn more about the emotions discovered in bees, click here:

The artifacts were often made from found objects – an Ivory dish-soap bottle transformed into an earthenware figure.
Up Next
Health