There is certainly some controversy over what causes Alzheimer’s disease.  While two proteins—beta amyloid and tau—are prime suspects in its progression, uncertainty remains over what initially triggers this debilitating malady.  Knowing this origin of AD, be it amyloid or tau or some other source, is a key step toward developing possible treatments to stall or stop the disease.

In the progression of the disease, beta amyloid plaques precede tau tangles, and both are accompanied by inflammation in the brain and eventual neural loss. 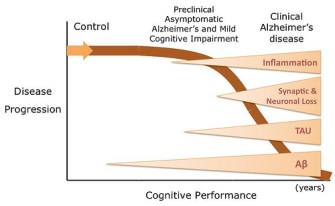 Much of what has been learned about beta amyloid and tau has come from experiments done on mice, says Dr. Samuel Gandy, a researcher at Mount Sinai Medical Center.  Mice normally do not get Alzheimer’s disease, because their amyloid plaques do not clump.  Yet if a set of mutated genes are given to them, it causes build-up of amyloid and tau and the rodent brains become plaque-and-tangle-ridden in patterns similar to those that characterize Alzheimer’s disease.  If the mice are then given a substance that lowers the levels of tau alone, cognitive function returns, says Dr. Gandy.  “It’s possible to sort of render the amyloid inert if you can turn down the tau, at least in the mouse model,” says Gandy.

Research has not yet made the jump from mouse to human, and amyloid and other components should not be dismissed in favor of solely tau-based research says Dr. Ottavio Arancio of Columbia University.  “It’s perfectly possible that one of these abnormalities, let’s say amyloid, may trigger the rest,” he says.  Further research into each of the many components at work in Alzheimer’s disease is warranted, he adds, as any one could lead to a new understanding of how this disease works.

At the NY Times, Elevating the Voice of Farmers on Climate Change

On the issue of climate change, among the most important, yet frequently overlooked segments of the public are farmers living in the agricultural Midwest and across major agricultural districts of […]