Jealousy. The green-eyed monster. We’ve all felt it at one time or another. In relationships, it’s often motivated by more powerful, underlying emotions such as envy, insecurity, anger, or the fear of abandonment or rejection. Psychologists say jealousy, like all emotions, isn’t good or bad, it just is. It’s how you react or behave that counts. Certainly, it can cause a disaster in your life, left uncontrolled. But it can also put you in touch with your deeper feelings and lead to self-realization.

What scientists have been wondering is where emotions emanate from inside the brain and their purpose in terms of our evolution and survival. It’s difficult to study jealousy ethically in humans, however. But we can learn a lot from studying our primate cousins. After all, a chimpanzee and a human are 96% identical, genetically speaking. That means certain genes and brain circuits are likely to carry across species.

In this study, University of California, Davis researchers identified the jealousy circuit in the brains of male titi monkeys. The coppery titi monkey (Callicebus cupreus) is native to the Amazon River basin of Brazil. It’s one of the few primates who practice lifelong monogamy. Only 3-5% of mammals do. Prairie voles, a rodent, has been the subject of most previous monogamy studies. But since they aren’t primates, such findings may not cross over to our species.

These monkey’s exhibit certain human-like traits in their relationships. They form close bonds, become upset when apart, and the male will guard his partner from danger. Investigators at the California National Primate Research Center (CNPRC), at UC Davis, conducted the study. Its senior author was Dr. Karen Bales, a core scientist there. She said of titi monkeys in a press release, “They have behavior and emotions that we recognize as close to how we feel.” While both sexes of this species exhibit mate-guarding, male titi monkeys are known to display a particular jealousy response. They lash their tales back and forth and arch their backs when they become jealous. 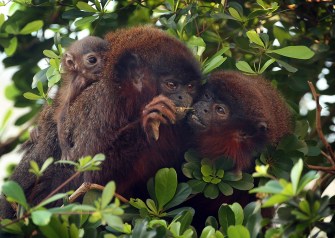 To induce the “jealousy condition,” Dr. Bales and colleagues placed each female partner in with a strange male monkey, in full view of her mate. Scientists left each female in there for a half hour at a clip. They also had a control group, where they put a strange female in with a strange male. The viewing monkey’s behaviors was filmed and its brain scanned to see which areas were active with each condition.

When a jealousy condition was introduced, the circuitry in a region known as the cingulate cortex saw a dramatic spike in activity. This region is known to facilitate pair-bonding in primates. In our species, it’s associated with social exclusion or social pain.

“The idea behind all of this is we have to first understand the way that the neurobiology of social bonding works normally before we can understand what happens in situations where social bonding, social behavior or social communication is impaired,” Bales said. “For instance, in disorders like autism or schizophrenia.” 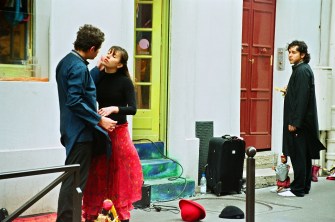 CNPRC researchers are out to find the neurobiological underpinnings to jealousy. Credit: Geoff B. Hall, Wikimedia Commons.

Researchers tested the male monkey’s hormone levels, too. In the jealousy condition, they saw increases in testosterone and cortisol levels. Cortisol is the stress hormone. While testosterone is associated with competition and aggression between males. “Trying to keep your mate away from your opponent is evolutionarily geared toward preserving the relationship,” Bales said.

The neurobiology of pair-bonding is critical for understanding how monogamy evolved and how it is maintained as a social system. Monogamy probably evolved multiple times so it is not surprising that its neurobiology differs between different species. However it seems as though there has been convergent evolution when it comes to the neurochemistry of pair-bonding and jealousy.

The next step, to find out if female titi monkeys, who also get jealous, have the same neurobiological response. “Sex differences in the neurobiology of social behavior may ultimately explain questions like why more boys than girls have autism, and why men and women act differently in romantic relationships,” Dr. Bale said. “A better understanding of this neurobiology may also provide important clues on how to approach health and welfare problems such as addiction and partner violence, as well as autism.” The results of this study were published in the open-access journal, Frontiers in Ecology and Evolution.

To learn more about the science of jealousy, click here:

Related
13.8
The weirdness of quantum mechanics forces scientists to confront philosophy
Though quantum mechanics is an incredibly successful theory, nobody knows what it means. Scientists now must confront its philosophical implications.
Neuropsych
Why is a Starbucks loyalty rewards program making customers so angry?
The rewards price to get a free cup of hot coffee at Starbucks is going up.
Empowering growth
7 essential management training topics for every team leader
From emotional intelligence to problem solving, these management training topics will set team leaders up for success.
Thinking
What if you could rewire your brain to conquer suffering? Buddhism says you can
For Buddhists, the “Four Noble Truths” offer a path to lasting happiness.
Hard Science
Solved: 500-year-old mystery about bubbles that puzzled Leonardo da Vinci
The solution involves the infamous Navier-Stokes equations, which are so difficult, there is a $1-million prize for solving them.
Up Next
The Present
Why People Are Happier with the Economy If Their Party Is in Power
Are you more likely to think everything is going well with your finances if the politics of your country’s leaders align with yours? One new study says yes.