It’s difficult to ignore the impacts of climate change. Especially when Barrow, Alaska, a town that sits at the top of the world, just above the Arctic Circle, was warmer than the California city of Alturas.

On Sunday morning, the National Weather Service for Sacramento tweeted that the Northern California city of Alturas was witnessing below-freezing temperatures of minus 3 degrees Fahrenheit while Barrow’s was at a balmy 3 degrees. 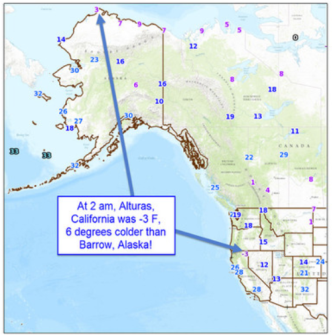 Alturas was even colder the previous day — minus 5 degrees — breaking a record set way back in 1931.

It would seem that climatologist Brian Brettschneider may need to make some amendments to his proposed road trip that would keep those who attempted it in 70 degree conditions (plus or minus a few degrees).

Compare this map to the recent temperatures reported by the National Weather Service.

It should be noted that Brettschneider used data to support this proposed road map. His estimates of 70 degree weather conditions came from the daily “normal” high temperatures from the National Centers for Environmental Information over a 30-year period. But it would seem the conditions have changed, which Brettschneider also alludes to regularly on his Twitter feed with daily before-and-after examples of record-breaking highs and lows across the country.

"People didn’t see the impacts as much as they’re seeing them and feeling them today," says EPA Administrator Gina McCarthy.

Related
The Present
How heat pumps of the 1800s are becoming the technology of the future
Innovative thinking has done away with problems that long dogged the electric devices — and both scientists and environmentalists are excited about the possibilities.
Starts With A Bang
JWST’s hunt for most distant galaxies gets double boost
Along with gravitational lensing and ALMA’s incredible long-wavelength spectroscopy, JWST is reshaping our view of the early Universe.
Thinking
Finding your essential self: the ancient philosophy of Zhuangzi explained
Adopting a healthy scepticism towards inherited ideas means “emptying the container of the Self.”
The Future
Startup’s bladeless flying car is designed to reach Mach 0.8
One of Jetoptera’s VTOLs is expected to reach speeds of around 614 mph, about as fast as a commercial jet airliner.
Health
New blood types are often discovered following medical disasters
New blood types are regularly discovered by an unusual absence or an unusual presence — both of which can result in tragedy.
Up Next
Politics & Current Affairs
Paris Is the Last Beacon of Hope We Have to Turn Around Climate Change
Early reports are optimistic.