Marco Polo’s travels in the 13th century altered the course of Western civilization. The mindset of Europe changed from Eurocentric to outward looking, from that point forward. Polo is even said to have inspired Christopher Columbus, whether for good or ill, you be the judge. The past often seems fixed and unyielding. But a discovery like this shows that it is actually more malleable that we assume. This is one of those moments where our understanding of historical development are altered irrevocably.

Alexander the Great’s India campaign in 326 BCE introduced the West to the East. Greek philosophy and art left an impression on India in the conqueror’s wake. Previously, there was no evidence of interaction between ancient Greece and China. We have known of some contact between the Roman Empire and the Middle Kingdom in the second and third centuries, CE.

The Silk Road was established in the third century, during the Han Dynasty, a trade route which was really nothing more than a series of caravan stops connecting the West to China. There are some Chinese accounts of Roman traders making it to their land before the Silk Road was even finished. In the time of Emperor Augustus, silk is known to have flooded into Rome and quickly became a favorite among the city’s aristocratic women. After the fall of the Roman Empire however, contact ceased until Polo. 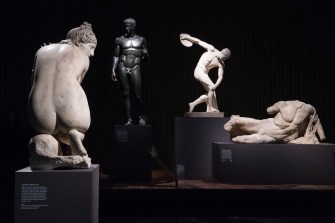 Greek statuary is now thought to have inspired the Terra Cotta Warriors.

Now, it’s believed that Greek statuary may have made it to China in the fourth century, sometime after Alexander’s campaign. Mitochondrial DNA taken from skeletons at the site of the first emperor’s tomb puts Europeans in close contact with the Chinese far earlier than previously thought. These Europeans interbred with the local population at the time when the statues were created.

Xian was the first capitol of a united China. Emperor Qin Shi Huang brought together the warring states under his flag in the third century BCE, mostly through war and bloodshed. He was born in 259 BCE and rose to power at the age of 13. After unifying the country, he built roads and canals, standardized coinage and weights and measures, put forth policies to stabilize the country, ended feudalism, and decreed what would become the first attempt at the Great Wall.

He died in 210 BCE. Emperor Qin’s inability to ensure his eldest son’s ascension saw a quick end to his dynasty, as a bloody power struggle erupted after his death. The emperor’s mausoleum however has enjoyed far more longevity than his dynasty. No one has been inside since it was sealed shut.

Archeologists recently discovered that the tomb site is far larger than first thought. Spanning an impressive 38 square miles (98 square kilometers), Qin’s mausoleum complex is 200 times that of Egypt’s Valley of the Kings. From the outside, the tomb looks like an imposing green hill. Ancient texts proclaim an ostentatious complex housed within. An entire palace built exactingly down the last detail, is housed within. Pearls adorn the cavern ceiling, arranged in the constellations of the night sky, and inside the palace, opulent rooms contain all the vestments, tools, and comforts befitting an emperor enjoying the afterlife. 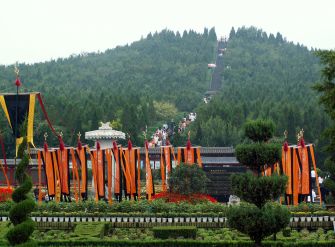 Rivers of mercury surround the mausoleum-palace making the air poisonous. This was not done to prevent grave robbing, though it has successfully done so. Instead, it was part of an ancient belief, to help ensure immortality. Archeologists learned more about the mausoleum complex by using ground-penetrating radar, taking core samples, and using remote sensing technology in these newly discovered areas.

Less than a mile from the mausoleum site, 8,000 warriors, each somewhat different, guard the emperor in the afterlife, or so it was thought. Rather than kill all his servants and bury them with him, Qin decided that clay representations would suffice, lucky for them. The warriors were eventually lost to history until a flustered farmer unearthed one in 1974. Since that time, 2,000 individual warriors have been excavated.

The makeup of the army varies widely. There are generals, charioteers, infantrymen, archers, and cavalry. Other statues including acrobats, dancers, strong men, even civil servants. It isn’t only the magnitude and variety among the statues that makes them remarkable, but the close attention to detail in each.

The faces vary from one to the next. Beyond that, there are chariots, horses, weapons, clothing, insignias, elaborate hairstyles such as topknots, and more. You can even tell what rank each one is by their clothes and accoutrements. Though a truly impressive feat, there is of course a dark underside. Over 700,000 conscripts endured forced labor for nearly thirty years to complete the warriors and the palace complex. 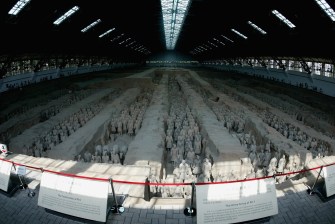 The sheer enormity is impressive enough, but the differentiation and attention to detail makes this site spectacular.

Dr. Li Xiuzhen is the Senior Archeologist at Emperor Qin Shi Huang’s Mausoleum Site. Not only is there proof of contact with the West, according to Dr. Xiuzhen, “We now think the Terra Cotta Army, the acrobats and the bronze sculptures found on site, have been inspired by ancient Greek sculptures and art. “ Before this, Chinese craftsmen had no tradition of building statues that were life-sized, or lifelike. This was not something the Greeks learned overnight, but took centuries to develop.

Professor Lukas Nickel supports the Greek traveler’s theory. He is the chair of Asian Art History at the University of Vienna. Prof. Nickel recently translated an ancient text telling of certain lifelike, human statues appearing in western China during the reign of Emperor Qin. He now believes a Greek master craftsman must have been onsite to teach techniques to local sculptors.

DNA evidence suggests that not only were Europeans present in Xinjian province earlier than thought, European settlements may predate Chinese ones in the region. This is China’s westernmost province. Europeans may have even lived there during the emperor’s reign. Even so, some are calling for more evidence, as these new theories could soon become controversial. 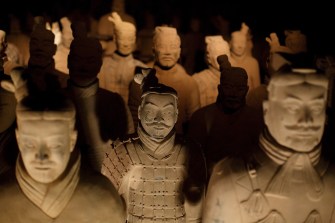 The differences in faces and facial expressions from one to another is remarkable.

Other discoveries at the mausoleum site included about a hundred tombs containing the mutilated skulls of young women. Though archeologists aren’t sure, they are believed to have been concubines, perhaps slaughtered in order to serve the emperor in the afterlife. Or they may have been killed so as to wipe out any chance of an heir someday rising up and claiming the throne. Archeologists found jewelry made of gold and pearls among their remains. Many other people are buried in this newly discovered area of the complex, including the mass graves of craftsmen and workers, and even criminals who were still in chains. These people must have died during the mausoleum’s creation, experts say.

The skull of a young man with a crossbow bolt stuck in it was also discovered. This is thought to be the remnants of the emperor’s eldest son, Prince Fu Su, who was killed during a power struggle following his father’s death. Other skeletons were found alongside the prince. After the emperor died, a younger son conspired with the chief eunuch in order to seize the crown. They wiped out the clan’s other princes and enjoyed a short lived success. For all his violence, this usurper, Qin Er Shi, never could live up to his father’s name, and he was overthrown just three years later.

To get a look at this discovery for yourself click here:

We should be exploring the oceans as seriously as we explore space.