Let’s get right to it: The third leading cause of death in the United States in 2013 was medical error. So we’ve got cancer, heart disease, and then the people who are trying to cure you. According to a study done by patient safety experts at Johns Hopkins and published by BMJ (formerly the British Medical Journal), you’re more likely to be killed by a doctor in the U.S. than by lower respiratory disease. Or an accident. Or a stroke. Or Alzheimer’s, diabetes, flu and pneumonia, or kidney disease.

Of course, everyone makes mistakes, even highly trained medical personnel, and the causes for the fatalities range from insufficient communication to plain-old human error and accidents. But if over 250,000 Americans die each year die as the result of medical mistakes—that’s 9.7% of all the yearly deaths in the U.S—we’ve got a problem.

This comes as something of a surprise because medical errors don’t even appear on the list of leading causes of death. 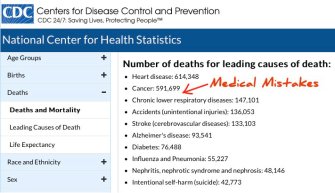 When the CDC (Centers for Disease Control) collects statistics from death certificates each year, they cull only the ICD (International Classification of Disease) code for the underlying cause of death—that is, the condition being treated—and fail to include any mistakes that were made, even though these errors may be noted on a patient’s death certificate. This is due to a methodology established in 1949, as lead researcher Martin Makary explained to EurekAlert: ”At that time, it was under-recognized that diagnostic errors, medical mistakes and the absence of safety nets could result in someone’s death, and because of that, medical errors were unintentionally excluded from national health statistics.” In fact, Makary says, “Incidence rates for deaths directly attributable to medical care gone awry haven’t been recognized in any standardized method for collecting national statistics.”

The Johns Hopkins team was able to see a truer picture by going through four studies conducted between 2000 through 2008 to figure out the number of lethal medical errors in the U.S. in those years. Comparing that figure to hospital admission records for the period, they arrived at a percentage value. When they applied that percentage to admission data from 2013, they calculated that there were 251,454 deaths in that year. 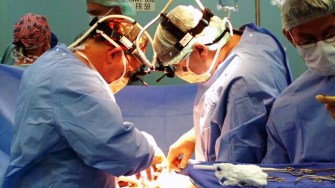 With this new perspective, the challenge is to find a solution that protects patients’ lives. The CDC’s list of leading killers is a major influence on funding for research and in establishing healthcare priorities, with the worst illnesses receiving the most attention. But deaths from medical errors aren’t even on the list. The Johns Hopkins report concludes in what has to be seen as something of an understatement, “We have estimated that medical error is the third biggest cause of death in the US and therefore requires greater attention.” (Emphasis added.)

With the new report, Makary told the Washington Post, “”We all know how common it is. We also know how infrequently it’s openly discussed … Measuring the problem is the absolute first step.”

“The digital HQ – the digital infrastructure that supports productivity and collaboration – actually became more important than the physical HQ.”
Up Next
Personal Growth

Groupthink Can Help Us… And Hold Us Back

For a long time we’ve tried to polarize teamwork as either 100% positive or negative. But in truth there are ways it can be both.