Scientists have just uncovered an amazing subterranean carbon dioxide exchange that goes on between trees and fungi. It’s a network of sorts, a so-called “wood wide web” that suggests forests are more cooperative ecosystems than previously understood, and not quite so much about competition. 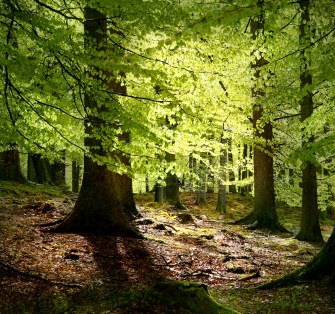 Suzanne Simard of the University of British Columbia was the first to see this in 1997 among seedlings she’d planted. The recent research, though, is the first time it’s been seen in nature and on such a large scale.

The underground networking was noticed by the Swiss Canopy Crane Project led by Christian Körner of the Institute of Botany at the University of Basel. For four years, they’d been inundating the canopy of five tall spruces in a Swiss forest with a distinctive form of carbon dioxide whose carbon product they could differentiate from the naturally occurring kind. (Theirs was depleted of carbon-13.) The team was interested to see how trees might handle excessive amounts of atmospheric CO2.

Trees use photosynthesis to convert CO2 and water into carbon-based sugars—this allows a tree’s leaves, trunk, and roots to absorb the carbon from the CO2. In 2012, the team examined the trees’ roots to see if the carbon had filtered down to them. It seemed like it had. But what surprised the researchers was finding their carbon in surrounding trees, too. They weren’t even all spruces: Nearby pine, beech, and larch trees had it in their roots as well.

The researchers made sure they hadn’t mistaken one tree’s roots for another’s and that none of the roots were touching each other. They checked the neighbors’ leaves. Nope, the carbon was only in their roots, so the transfer had to be happening underground. Since they didn’t find their carbon in other adjacent plants, they knew this couldn’t be a simple release of it from the test trees’ roots down into the soil.

Where they did find lots of their carbon was in the fungi growing on the roots of the affected trees: Mycorrhizal fungi, which provide tree roots with nitrogen and phosphorus and receive carbon they consume themselves. What’s surprising is that it seems Mycorrhiza, which can colonize several hosts at the same time, weren’t eating all of the carbon: They were apparently delivering carbon from one tree to another. 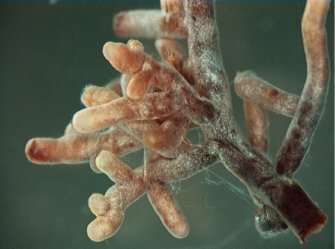 We’re not talking about a little bit of carbon, either. The scientists estimate that in an area roughly the size of a rugby pitch—68m wide and 100m long—the trees, via Mycorrhiza, are swapping approximately 280 kilograms of carbon a year. That accounts for nearly half the carbon in the trees’ fine roots.

This unconscious cooperation between the trees and fungi raises some tantalizing questions that scientists are now trying to answer. Do trees swap carbon back and forth? Does it matter what kind of tree photosynthesizes the carbon? Most intriguingly, could this hidden network mean that healthier trees may be able to carry on photosynthesis for weaker trees at times of environmental stress? Wow.

Uncertainty is inherent to our Universe.
Up Next
Politics & Current Affairs

The decision to replace Andrew Jackson on the $20 brought up an opportunity to feature historical Native American leaders on U.S. currency.