The Mediterranean diet is widely considered one of the world’s healthiest, thought to be the key reason why there are so many centenarians in places like the Italian village of Acciaroli. However, pasta, a staple of the Mediterranean diet, has been vilified in recent years thanks to low-carb diets like paleo and keto.

A new study suggests that’s not quite justified, and that pasta can be part of a healthy diet that actually helps people lose weight.

The results from those studies showed that eating pasta as part of that balanced diet didn’t contribute to weight gain or increased fat levels. In fact, the average participant lost a little more than a pound over the course of the studies. 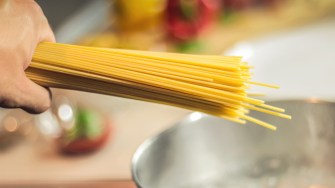 A clenched-fist-size portion of pasta usually amounts to one serving. (Image: Pixabay)

“In the context of weight, maintaining a healthy, balanced diet, in this case, a low-glycemic-index diet, (eating pasta) won’t sabotage or undo your goals and may even help you achieve them in terms of your weight,” lead study author John Sievenpiper told MSN.

That might seem strange, considering pasta is a processed food and a refined carbohydrate. But the processing that pasta undergoes actually leaves its starch less digestible—and more slowly absorbed by the body—than other processed foods. This causes you to feel full for longer, and hopefully helps you to stave off cravings for junk foods between meals.

“These results are important given the negative messages with which the public has been inundated regarding carbohydrates, messages which appear to be influencing their food choices, as evidenced by recent reductions in carbohydrate intake, especially in pasta intake,” the authors wrote.

“So contrary to concerns, perhaps pasta can be part of a healthy diet such as a low GI diet,” Sievenpiper said in a statement.

A low GI diet could also include most fruits and vegetables, beans, and nuts, while white bread, bagels, and cakes are all examples of high GI foods with sugars that are quickly absorbed and digested by the body.

Nichola Ludlam-Raine, a dietitian and spokesperson for the British Dietetic Association, told Newsweek that carbs aren’t the devil—it just comes down to how you incorporate them into your diet.

“The reason why carbohydrates have a bad rep is that we tend to eat too much of them and then smother them in fat and sugar, i.e. extra calories. For example big bowls of cheesy pasta and sugary cereal. So it isn’t carbohydrates per se that cause weight gain, it’s the portion size in which we eat them and what we add to them that counts.”

So instead of eating pasta smothered in red sauce and red meat, delicious as it may be, you could cook up an Italian favorite like spaghetti aglio e olio, which is pasta with olive oil, garlic, salt, parmesan cheese, and maybe a bit of parsley and red pepper.

“It’s not the amount of fats or carbs in your diet that matters, it’s down to the overall quality and taking both into account matters,” Ludlam-Raine said.

Related
The Learning Curve
5 Stoic quotes to help you through difficult times
“We suffer more often in the imagination than in reality.”
Starts With A Bang
The good reasons scientists are so hostile to new ideas
Many people out there, including scientists, claim to have discovered a series of game-changing revolutions. Here’s why we don’t buy it.
The Present
Climate change is altering the chemistry of wine
Smoke taint from wildfires is gross, even to wine amateurs.
13.8
Could a hidden variable explain the weirdness of quantum physics?
We have searched and searched but have never found one.
The Past
The Wild West was lawless and chaotic — and the police helped keep it that way
Lawmen and outlaws were often the same people.
Up Next
Surprising Science
An asteroid that nobody knew was coming flew very, very close to our planet. Gulp.
Quick, what’s traveling at 106,000 kilometers per hour (66,000 mph) and is as big as a football field?