Honeybees have a very simple understanding of the concept of zero, new research suggests.

A study published in Science outlines how researchers in Australia taught bees to count symbols, and then tested whether they understood that no symbols meant fewer than one or several symbols.

First, they had to train the bees to count. To do so, Scarlett Howard of RMIT University in Melbourne and her colleagues placed sugary prizes on cards they tacked to a wall. Each card had symbols on it, and the prize was always on the card with fewer symbols.

They let the bees loose.

The bees eventually learned to associate the prize with cards that had fewer symbols, and most would fly to the sugar water immediately. Then the researchers put the prize on cards with zero symbols.

The bees chose the blank card about 65 percent of the time, a statistically significant number that suggests they have a basic understanding of the concept of zero—putting them in a small group of animals like primates, dolphins, and parrots.

What’s more, it was easier for the bees to differentiate between blank cards and ones with many symbols. 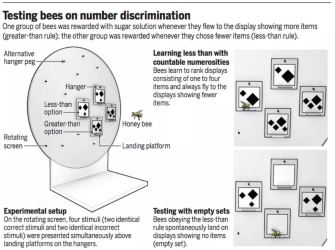 “When we showed them zero versus six, they did that at a much higher level than zero versus one,” Howard told NPR. “So what tells us is that they consider zero as an actual quantity along the number line. They’re actually better at doing zero versus six because those two numbers are further apart.”

It might seem like an easy to task to determine that nothing is less than one, but research suggests it’s not quite obvious, even for human children.

“It’s easy for them to count ‘one, two, three, four,’ but zero, it’s nothing, it’s not something to count. So it’s not the same category,” Aurore Avargues-Weber, a CNRS researcher with the University of Toulouse, told NPR.

The concept of zero is a fairly recent discovery of mankind.

“What is nothing?“ study co-author Adrian Dyer asked Vox. “[It’s a question that seems] a bit simple to us. But the actual ability to do it took a long time to arrive in human culture. And so it’s not straightforward, so understanding how a brain [a bee brain, a human brain, etc.] does it is exciting.“

The brain of a honeybee is vastly simpler than that of a human. To put it in perspective, your brain has about 86 billion neurons while a bee has under 1 million. So, the fact that bees can—on some level—grasp the concept of zero suggests other animals might be able to do the same. At the very least, it shows that a bee’s modest brain is capable of some surprising feats.

Wireless system can power devices inside the body