Great white sharks will likely start moving north as warming seas open new habitats for the predatory fish, according to a new study.

The study, led by Ken Collins at the University of Southampton, predicts that at least 10 types of shark currently found in warmer places, like the Mediterranean and coast of Africa, will be swimming in British waters in coming decades.

“These include the likes of blacktips, sand tigers and hammerheads, which are currently found swimming off the coasts of Spain and Portugal,” Collins said.

Collins, a Senior Research Fellow within Ocean and Earth Science, National Oceanography Centre Southampton at the University of Southampton, said the changes are the result of climate change, which poses threats to shark populations worldwide.

“Though while the potential number of shark species may increase in the next few decades, the overall number of sharks, especially the larger ones, will fall as a result of overfishing, plastic waste and climate change.” 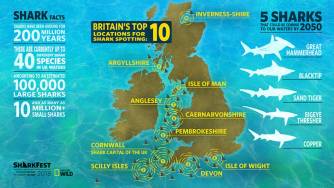 He elaborated in an interview with The Independent:

“We will increase from 40 species to maybe 60, but there will still be less of them—and some of the existing ones will maybe go extinct in the meantime… They are getting rarer and rarer—and it’s the big sharks that have the problem because people target them.”

Shark migration patterns also seem to be changing in other parts of the world’s oceans. Earlier this year, National Geographic spoke with marine biologist Stephen Kajiura, who’s been tracking blacktip sharks for more than a decade.

“This year has been strange,” he said.

During the colder months, blacktip sharks normally swim south from North Carolina to Florida, but this year researchers noticed that only one-third of the usual number of blacktips had migrated south. They suspect the sharks are staying north because of warmer waters.

“Last year was unusually warm all winter: The water temperatures never got below 73.4 Fahrenheit,” Kajiura said. “This year, the temperatures have risen dramatically to 78.8 Fahrenheit. It’s now even hotter than this time last year.”

Sharks can disrupt marine ecosystems when they relocate or change migration patterns. An increase of sharks in a region can result in the extinction of other types of marine life, including other species of shark.

Conversely, the disappearance of sharks from an area they once inhabited, like the Florida coast, can spell disaster for coral reefs and seagrasses because sharks help keep the “ecosystem healthy by weeding out weak and sick fish,” as National Geographic reported.

Juice is terrible for children. Why do we keep giving it to them?

A glass of juice has as much sugar, ounce for ounce, as a full-calorie soda. And those vitamins do almost nothing.