When a child is born with Down syndrome (DS), he or she has three #21 chromosomes rather than the typical two. The medical term for the syndrome is “Trisomy 21,” and it’s the reason 3/21 is celebrated in the U.S. as World Down Syndrome Day. Perhaps, then, it’s no coincidence that there’s been a lot of coverage lately of a newly published Spanish study that suggests a compound in green tea may be able to reduce the facial morphology, the flattened facial profile and nose, indicative of Down syndrome.

The study, published March 8, 2018, looked at the effect of the compound on a computer mouse model, and on an extremely small — some might say “statistically insignificant” — human sample. Within the former, different dosages produced drastically different results, and so the scientists are not recommending the treatment of anyone with green tea extract right now. Still, the research is interesting and worth following going forward.

Down syndrome is the most commonly occurring chromosomal condition, occurring in one in every 700 babies born in the U.S., or about 6,000 infants a year. It’s not a disability, though most people with Down syndrome do experience some cognitive disabilities. However, as the National Down Syndrome Society (NDSS) notes, “the effect is usually mild to moderate and is not indicative of the many strengths and talents that each individual possesses nonetheless.” People with Down syndrome live full, rich lives, though statistically have a reduced life expectancy of 60 years. Even so, things are getting better: In 1985, life expectancy was 25 years.

As bioethicist Chris Kaposywrites, however, we as a society have a troubling ambivalence about Down syndrome. One one hand, baby-product maker Gerber has been acclaimed for naming a child with Down syndrome, Lucas Warren, as their 2018 Gerber baby. In contrast, Netflix recently saw nothing wrong with airing a special in which comedian Thom Segura makes fun of people with Down syndrome. 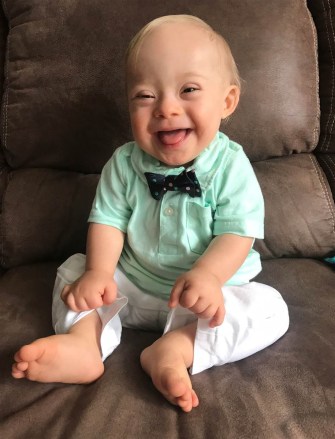 More meaningfully, even as much of society has evolved in its acceptance of people with Down syndrome, it’s still the case that from roughly 60% to 90% of expecting parents informed their child will have Down syndrome choose to terminate the pregnancy.

Families raising children with Down syndrome may not even want to “normalize” their children’s appearance. As Linda Gilmore of Queensland University of Technology in Australia tells New Scientist, “Some are keen to try anything that might make things easier cognitively and socially,” but “Others feel strongly about not changing their child’s personality or appearance — not changing the person they are.”

The new study looked at the effect of epigallocatechin-3-gallate (EGCG), a compound found in green tea. It’s known to slow down the production of DYRK1A, an enzyme that may produce a range of Down syndrome characteristics, including its typical facial features.

The researchers studied the effect of EGCG in mouse models, and the results were both encouraging and worrying: “Our results showed that mouse models treated with low dose of EGCG during pre‐ and postnatal development improved facial dysmorphology.

However, the same treatment at high dose produced disparate facial morphology changes with an extremely wide and abnormal range of variation.” As a result, the authors concluded, “Current evidence warns against the non‐prescribed intake of this supplement as a health‐promoting measure.”
Previous reports have linked EGCG to reducing the cognitive effects of Down syndrome — though the research is inconclusive — and some families have already been treating their children with non-prescription, over-the-counter supplements containing the compound. It’s a group of 13 such families from which the human aspect of the new study derives. Again, this is a tiny sample, and with no standardized dosage or timing protocols — each child consumed roughly the equivalent of eight cups of green tea per day — so the families’ experience by no means constitutes a controlled study.

The children were studied in three groups:

The researchers conducted structural analyses of children without DS and the children in the study. They examined 3D coordinates for 21 facial landmarks and found that six of the seven 0-3-year-olds exhibited facial features that were most like the non-DS (or “euploid”) children in their age group. The scientists suspect that this is because such the underlying structural development of such young kids is still underway and most susceptible to the influence of EGCG.

There was about 30% less facial variation from non-DS (EU) kids in children 0-3 with Down syndrome who’d been treated with EGCG.

Put down that supplement

As we said earlier, this was a small study, and the results of the mouse-modeling element indicated that dosages can be critical both to the success of the treatment and also in avoiding risk. As Jean Maurice Delabar at Paris’ Brain and Spine Institute points out New Scientist, those results suggest that high amounts of EGCG can result is extreme facial and skeletal issues.

Related
Sponsored
Want to boost your happiness? Buy experiences, not material possessions
Some experiences even continue to pay dividends time and time again.
High Culture
Did Paul Cézanne hide an early self-portrait underneath a 160-year-old still life?
To answer that question, we may have to figure out when the famed painter started to go bald.
Strange Maps
Dutch government releases a genuine treasure map from WWII, sparking a hunt for the loot
X marks the spot. The Dutch town of Ommeren has been swamped by detectorists armed with shovels looking for $20-million treasure.
Thinking
Creative wisdom from Rick Rubin: embrace your inner gatekeeper
Unlock the full potential of your creativity with holistic detachment. This is the way of the editor.
If money doesn’t buy happiness, you’re spending it wrong
These money experts say you can buy happiness. There are some red flags to look out for, though.
▸
7 min
—
with
Lindsay Bryan-Podvin
Up Next
Politics & Current Affairs
‘I’m really sorry that this happened’: Zuckerberg breaks silence on Cambridge Analytica scandal
In his first media appearances since the Cambridge Analytica story broke, Mark Zuckerberg spoke to several publications about how Facebook plans to protect user data going forward.