I admit it. I confess. I’ve got a touch of what my guest today calls “progressophobia”. Ever since Charles Dickens got hold of me back in middle school, and William Blake after that, I’ve been a little suspicious of the Great Onward March of science and technology. Gene therapy, healthier crops, safer, more efficient forms of nuclear energy? Very nice, very nice. But what about eugenics, climate change, and Fukushima?For every problem human ingenuity solves, doesn’t human nature create a new one, on a bigger scale? Dammit, Spock, can your cold, calculating reason fathom the mysteries of the human heart?

But you know what? After devouring all 453 pages and 75 graphs of psychologist Steven Pinker’s new book ENLIGHTENMENT NOW, I admit defeat. The defeat of defeatism. This man has done the math. Since the 18th century things have been getting better in pretty much every dimension of human well-being. Health, safety, education, happiness, you name it… And we’ve done it with the most reliable tools we have: reason, science, and Enlightenment humanism.

ADDED BONUS! Find out what Professor Pinker thinks of Jason Gots’ word ‘Philoso-fro’, coined in honor of his hairdo. 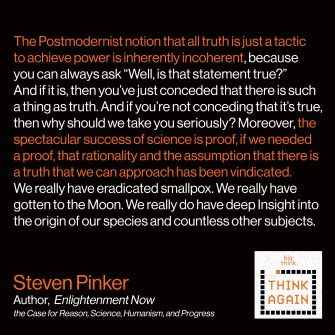 Guess which country has 269% inflation.
Up Next
Culture & Religion

Friday essay: Joan of Arc, our one true superhero

She made the world be the change that she wanted to see in herself. She thought local and acted global.