We’ve covered Stephen Hawking’s final theory before, relating to the multiverse and the dazzling postulate that there were infinite Big Bangs, one right after the other, and that we exist in a slowed-down universe which allowed for solar systems, stars, and galaxies to form.

Hawking’s theory, co-authored with physicist Thomas Hertog of KU Leuven University in Belgium, posits that we can obtain quantifiable data that must be collected via space probe in order to be proven correct.

Says Hertog, “We wanted to transform the idea of a multiverse into a testable scientific framework.”

And that is what the paper is based on: Quantifying the background radiation from the beginning of time, which—if their theory is correct—should be measurable.

Basically, the theory holds that after the Big Bang, the universe expanded in what’s known as exponential inflation but some “bubbles” of that space stopped inflating or slowed down enough for stars and galaxies to form.

“The usual theory of eternal inflation predicts that globally our universe is like an infinite fractal, with a mosaic of different pocket universes, separated by an inflating ocean,” Hawking explained. 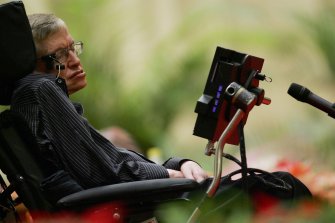 BEIJING – JUNE 19: (CHINA OUT) British scientist Stephen Hawking, delivers a lecture entitled ‘The Origin of the Universe’ at the Great Hall of the People June 19, 2006 in Beijing, China.(Photo by China Photos/Getty Images)

“The local laws of physics and chemistry can differ from one pocket universe to another, which together would form a multiverse. But I have never been a fan of the multiverse. If the scale of different universes in the multiverse is large or infinite the theory can’t be tested.”

If you’d like to take a stab at reading and beginning to comprehend it, have a go at this abstract version. Or the full one is also online.

And after trying hard to understand all of this, I think I’m going to pop a strong ibuprofen.

Here’s Hertog himself, explaining it as best he can in 22 minutes.

Related
Life
Scientists use CRISPR to insert an alligator gene into a catfish
Disease kills off 40% of farmed catfish. This gene protects them.
Neuropsych
How you breathe affects your brain
Your breathing rhythm influences a wide range of behaviors, cognition, and emotion.
Health
What happens when regular porn watchers abstain for a week?
Researchers watched for signs of withdrawal — but didn’t find any.
Neuropsych
Daily caffeine intake temporarily alters your brain structure
Compared to people who took a placebo, the brains of those who took caffeine pills had a temporarily smaller gray matter volume.
Thinking
Why you should laugh at yourself, according to Seneca and Nietzsche
“It is more human to laugh at life than to lament it.”
Up Next
Technology & Innovation
Could Facebook’s new ‘Dating’ service really destroy Tinder?
Facebook CEO Mark Zuckerberg just announced plans to add a dating feature to Facebook, a move that threatens established companies in the online dating industry.