Good news. A recent study by NASA shows data from the Ice, Cloud and land Elevation Satellite (ICES) indicates that there have been “mass gains from snow accumulation” that “exceeded discharge losses” from the thinning glaciers.

For a long time, researchers attributed the cause of rising sea levels to melting land-based ice and thermal expansion. However, this study puts the former under scrutiny on at least one major continent: Antarctica. 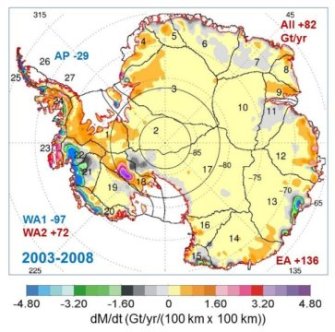 The data shows the accumulation of snow along East Antarctica adds enough ice to offset the glacial thinning going on in West Antarctica. This snowfall has been going on for the past 10,000 years, starting at the end of the last Ice Age. Jay Zwally, a glaciologist with NASA’s Goddard Space Flight Center, explained in a press release that “the air became warmer and carried more moisture across the continent, doubling the amount of snow dropped on the ice sheet.”

NASA’s data indicates that ice sheet thickness, measured by satellite altimeters, is increasing in East Antarctica and the interior of West Antarctica by 1.7cm. But researchers are still seeing losses in the Antarctic Peninsula, and Thwaites and Pine Island region that are unprecedented. If the pace continues, the losses in ice will soon outweigh the gains made by falling snow.

Zwally estimates that “the losses will catch up with the long-term gain in East Antarctica in 20 or 30 years.”

This news also adds some confusion. Researchers have noted a rise in the world’s sea levels since the 20th century–1,01 to 2.5mm per year.  Out of this total sea level rise Antarctica’s melting ice sheets contributed around 0.27 millimeters per year.

Scientists ranked countries on their end-of-life care. The U.S. fared poorly.
Up Next
Politics & Current Affairs

Why Politicians All Seem The Same, Gas Stations Come In Pairs and Twitter is Turning Into Facebook

Hotelling’s law, a principle from game theory explains the tendency for industries to set up shop right next door to their closest competitor.